Finishing at the peak

Eight throwing titles, seven team titles, and 20 years of coaching and influencing youth in Powell has come to an end — as Panther throwing coach Nevin Jacobs’ career finished at the …

Finishing at the peak 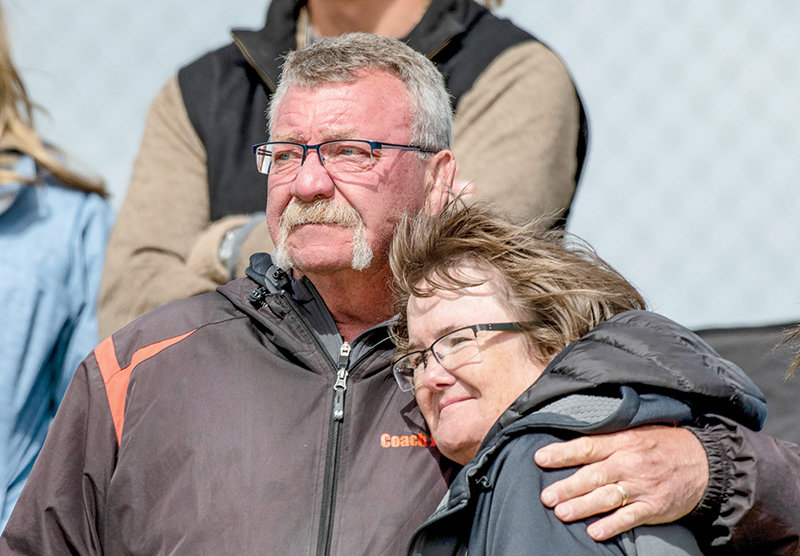 Nevin Jacobs embraces his wife Deb, as he looks on during the state track meet last month in Casper. Jacobs announced his retirement after 20 years as the throwing coach at PHS.
Tribune photo by Mark Davis 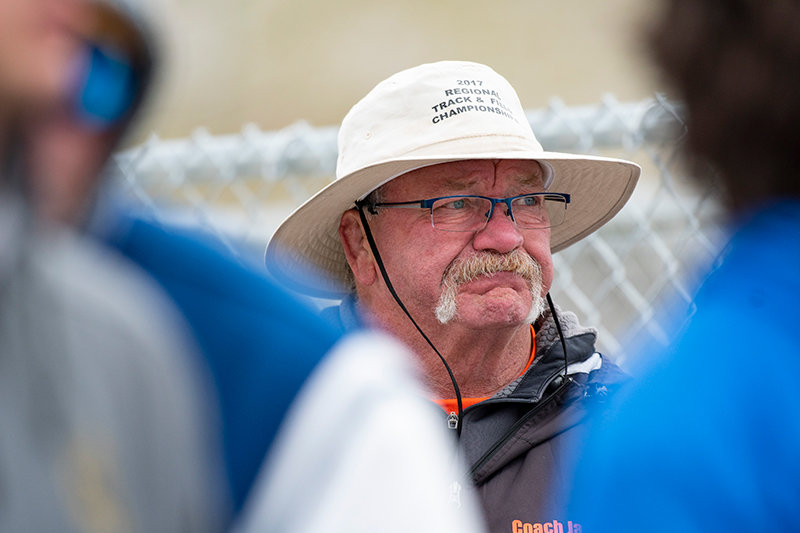 Fighting back tears, Nevin Jacobs looks on as he finished up his coaching career at the Wyoming State Track and Field Championships in May.
Tribune photo by Mark Davis
Previous Next
Posted Thursday, June 9, 2022 8:25 am
By Seth Romsa

Eight throwing titles, seven team titles, and 20 years of coaching and influencing youth in Powell has come to an end — as Panther throwing coach Nevin Jacobs’ career finished at the Wyoming State Track and Field Championships in May.

Beginning his career in not-so-typical fashion, Jacobs decided to take on the task of volunteering to help Panther track in 2003 when his kids started to make their way through the program.

“I didn’t start coaching until I was 46,” Jacobs said.

Despite not starting his career as young as some of the other coaches around the state, Jacobs knew his experience would help the program grow.

On the strength of his experience as a thrower for the Powell program in the 1970s, Jacobs began to build a program that started with the best throws being 107 feet for discus and 37 feet in shot put his first year.

After two years of volunteering for the program Jacobs was hired as an official assistant coach in 2005.

In 2006, Jacobs had his first state champion in discus, as Amber Davis won with a throw of 122 feet, 1 inch, winning the event by nearly a whole foot.

2006 was also the year the boys’ team won the title that Jacobs was a part of, as the Panthers won back-to-back years — winning in 2007 as well.

A couple of years later the boys program won again, as the Panthers won a third title in four years in 2009.

After being part of a team title, in 2011 for the boys, the Panther throwing program started a strong run of throwers for three years.

Starting in 2012, Garrett Lynch won his first state title as a sophomore, winning the discus by 2 inches.

In 2013, Lynch completed the double, winning both the shot put and the discus in convincing fashion.

Completing a repeat of his titles in 2014, Lynch set the 3A class record in shot put at 59 feet, 5 inches, which has since been broken.

The boys’ team finished with another team title in 2014, but Jacobs also had a double champion for the girls as Tori Sleep won both the discus and shot put by more than 5 feet in each event.

Despite winning all four titles, Jacobs said his favorite part of that season came at the regional meet.

“My favorite memory from that year is looking up at the podium and seeing seven of the eight shot put placers at regionals being from Park County,” Jacobs said.

That season Powell had four placers at regionals and Cody added three, as Park County nearly swept the podium in 2014.

Despite not having any state champions individually since 2014, Jacobs has helped a number of Panthers get on the podium at regionals and state.

That included seniors Toran Graham, Reagan Thompson, Lane Shramek and Sheldon Shoopman, who all placed in the top four at the state meet just a few weeks ago.

Those points on the girls side earned over the last two years have helped the Panther girls capture back-to-back titles in 2021 and 2022, as well as both boys and girls winning the regional title this season.

Despite all of these accomplishments, Jacobs stressed that there were more important things he tried to teach the kids.

“What I felt I brought was not the importance of winning the event, I stressed doing things right,” Jacobs said. “One of the things I stress all year every year is that you are considered a student athlete in that order, if you were not a student you could not be an athlete.”

Jacobs said that, along with being a student first, came honor, respect and discipline.

Finishing out his career, his hope was that he would not become that coach talked about as “should have retired years ago.”

“I thought maybe it was time for me to retire,” Jacobs said.

One thing Jacobs said he will miss is the group of coaches he made friends with around the state, as that group helped make each meet competitive but fun each and every time.

Following a year where he had his most seniors ever graduate on a team, he knows that the next coach will have a lot of young throwers going forward.

Outside of coaching, Jacobs said he will continue to officiate events while working for the city as a streetsweeper.

“It’s been a lot of fun and it’s been a great ride,” Jacobs said.