A felon who fled from Cody police while armed with a handgun last year has been ordered to serve two years in federal prison. 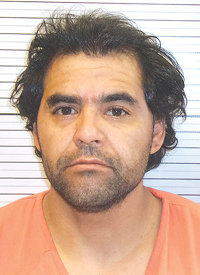 A felon who fled from Cody police while armed with a handgun last year has been ordered to serve two years in federal prison.

Guadalupe Hernandez Jr., a 39-year-old former Lovell resident, received the sentence from U.S. District Court Judge Scott Skavdahl on June 10. The 24 months and two days of prison time for being a felon in possession of a firearm will be followed by three years of supervised release.

Hernandez has been incarcerated since Aug. 27, 2019, when he was arrested by Cody police.

Hernandez was a passenger in a vehicle stopped for failing to properly signal a left-hand turn. When Cody Police Officer Blake Stinson approached the vehicle, he  reportedly realized that “all three occupants had recent drug charges or convictions” and began radioing dispatch, Stinson later wrote in an affidavit. That’s when Hernandez got out of the car and took off running across a couple of yards.

As Hernandez jumped over one fence, he pulled a handgun out of his pants, Stinson wrote, prompting the officer to draw his own firearm. Hernandez ultimately dropped the FNH FNX-45 pistol, fell to the ground and was taken into custody, charging documents say.

Because Hernandez has prior felony convictions, he was prohibited from possessing a firearm under federal law, and the U.S. Attorney’s Office in Cheyenne took up the case. That federal prosecution — along with an investigation by the Bureau of Alcohol, Tobacco, Firearms and Explosives — resulted in Hernandez pleading guilty to the felony possession charge early this year.

At the time of the offense, Hernandez was already, as he later put it, “on the run” from authorities in Big Horn County. Prosecutors there had been seeking his arrest for a couple months, saying he absconded from probation on a prior felony conviction for endangering children. In that 2014 case, Hernandez had reportedly kept meth in the same house as his kids.

He also had a 2011 felony conviction in Big Horn County for third-degree arson, according to charging documents.

In a June 11 sentencing order, Judge Skavdahl recommended that Hernandez serve his prison time at the Federal Correctional Institution in Bastrop, Texas — a low security facility that has a nearby minimum security prison camp. Hernandez has family in the state; in letters submitted to a local judge last year, family members described Hernandez as a good man who has repeatedly fallen prey to his drug addiction and a poor choice in friends.

Meanwhile, the driver of the vehicle in which Hernandez was riding, 34-year-old Robert Demoney of Powell, wound up serving nine months in jail and is now serving three years of supervised probation for a felony count of possessing a controlled substance for a third time. Demoney admitted to owning a syringe loaded with 10 units of methamphetamine that police found under the driver’s seat and said he’d injected meth less than 24 hours earlier, charging documents say. Stinson said police also found a digital scale and a meth pipe in the vehicle.

Demoney had initially sought to suppress all of the evidence against him, saying that police had violated his rights under the U.S. and Wyoming constitutions.

Stinson wrote in his affidavit that he had recognized the vehicle “from numerous previous law enforcement contact[s]” and pulled it over after Demoney “failed to signal for 100 [feet] before changing lanes or making a turn.”

However, Demoney’s court-appointed attorney, Lindsey Krause Crandall, had argued that the officer “was without reasonable suspicion or probable cause or any other legal justification to detain and search the defendant and/or his vehicle.”

Demoney ultimately agreed to drop the motion and take a plea deal in early January. While on probation, he must obey the law, make efforts to stay employed and avoid alcohol, drugs, felons and others on probation, among other conditions.

Another passenger in the vehicle, Stephanie Lee, 32, pleaded guilty to misdemeanor charges of possessing and using a controlled substance after she tested positive for meth and was deemed to have been the owner of a meth pipe found in the car. Lee served 46 days in jail, was ordered to pay $505 and placed on a year of unsupervised probation in February. However, just a week later, Cody police say the then-6-month-pregnant woman tested positive for meth and THC during a probation check. Lee served another 56 days in jail and was ordered to pay $605 for two additional misdemeanor counts of using a controlled substance and another of attempting to defeat a drug test. She is currently serving a year of unsupervised probation.