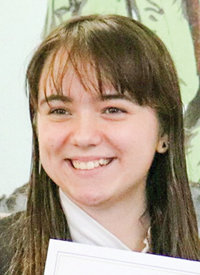 The American Legion National Oratorical Contest, established in 1938, challenges high school students to learn and speak about the U.S. Constitution.  This year’s event, held on April 23, was attended by students from all 50 states, U.S. territories and American Legion departments overseas.  The high schoolers vied for a grand prize of $25,000.

Johnson prepared with the help of her family —  including her sister Audrey who threw stuffed animals at Johnson during practice runs to increase her concentration — but she did not make it past the highly competitive quarter-finals.

Still, she enjoyed the experience and the connections she made during her time in Indianapolis.

“It was probably most disappointing to not be able to move up (into) the next round of competition, but it’s pretty brutal with the 50 people going down to 18 in a series of one round,” Johnson said. “I think definitely being able to interconnect and really get to make friends with people — (that) was probably one of the most memorable parts.”

Johnson won both the district and state level competitions earlier this year and qualified for the national level, earning $2,000 in scholarship money before she attended the national competition.

“It really has inspired me to want to keep going and to make it back to Nationals, not just because I get to meet people, but also for the environment and the ability to be surrounded by so many people that are passionate about America and passionate about doing better,” she said. “I think that was something that was valuable to take away as well.”