Local animal shelters trying to keep up with influx, searching for good homes

Recent economic instability is hitting Big Horn Basin residents where it hurts the most; their pets. And now, as pet ownership becomes more challenging, it is hitting local animal shelters as …

Local animal shelters trying to keep up with influx, searching for good homes 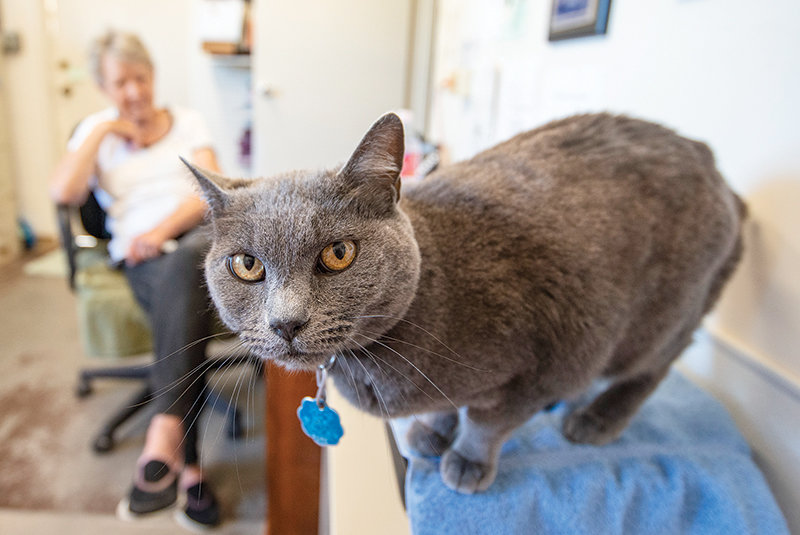 Gracie, a cat whose permanent home is at the Moyer Animal Shelter, keeps shelter founder Elfriede Milburn company in the office at the Powell shelter. The tougher the economic struggles are, the fewer people are looking to adopt.
Tribune photo by Mark Davis 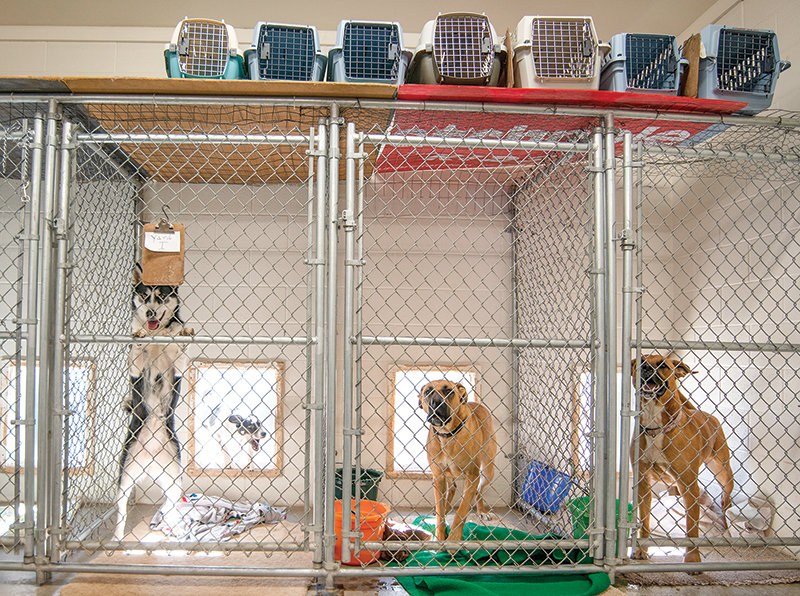 The Moyer Animal Shelter has several dogs currently up for adoption. The shelter also has eight cats ready to go to a good family.
Tribune photo by Mark Davis 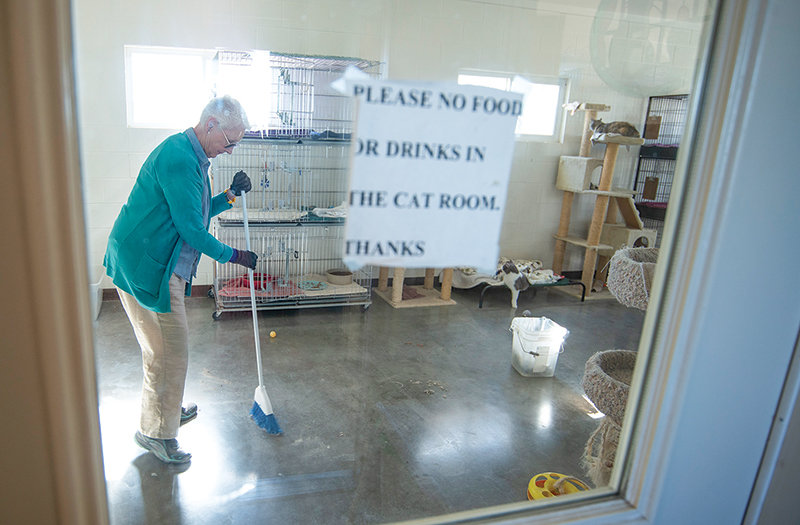 Nan McCann, who has been with the Moyer Animal Shelter ‘from the beginning,’ cleans up in the shelter’s cat room. The shelter currently has eight cats up for adoption.
Tribune photo by Mark Davis 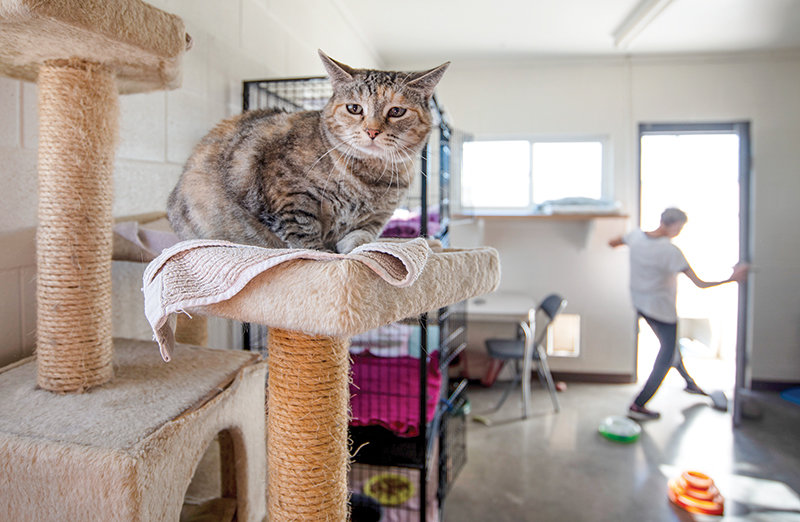 One of the cats up for adoption at the Moyer Animal Shelter hangs out on a cat perch while Elfriede Milburn cleans its usual area for daytime naps.
Tribune photo by Mark Davis
Previous Next
Posted Wednesday, June 22, 2022 8:20 am
By Mark Davis

Recent economic instability is hitting Big Horn Basin residents where it hurts the most; their pets. And now, as pet ownership becomes more challenging, it is hitting local animal shelters as well.

Giving up your pet is tough, but it’s important to secure a new home for your dog, cat, snake or fish. The emotional toll can be devastating to the owners, but for animals, it’s a matter of life and death.

Owners are occasionally too embarrassed or don’t have the time or money to rehome their animals. Others seemingly are capable of abandoning their animals without a care. Nichole Good, operations manager at the Park County Animal Shelter has seen it all and often has a broken heart watching the impact of abandonment.

“Right now we’ve had the most abandonment cases we’ve ever had,” Good said.

Recently an unusual pet – a ball python – was brought to the shelter. “O’lay was left in a tank on top of a car in a parking lot here in Cody. She just sat there baking in the sun and she almost died,” Good said.

Employees at the shelter took in the snake and nursed it back to health. But finding a home for the gorgeous snake was tough. “Our biggest goal here is setting animals up for success and making sure that we find them good homes,” she said. “But right now it’s really hard. People just aren’t adopting.”

Good eventually fell in love with the friendly snake, named O’lay because it was found near Taco John’s, and adopted it herself. But she can’t handle more animals, and if the no-kill shelter can’t find homes for the numerous cats, dogs and other pets soon, they’ll have to turn people away who need to give up their pets.

That more than likely means cases of abandonment will increase in the coming months, she warned. And for a house pet, that can mean finding a new home will be difficult, or worse, death.

“It’s a rippling effect. When people aren’t adopting, we run out of room and we can’t take any more. Then, when animals have been dumped, if I don’t have room to keep them, I can’t take them. And then how do we help them?”

The shelter recently took in 35 cats in a hoarding case and they are at full capacity. They can’t take another until someone adopts one. Some cats have the natural ability to survive in the wild, but they soon turn feral and can pass diseases to other pets, repopulate quickly and attack and kill wild animals, like upland game birds or even other pets. They become a danger to those coming in contact with them.

Dogs are different. They will not survive in the wild and more than likely come into conflict with landowners and be shot, get hit in traffic or even starve to death, Good said.

The shelter has also found abandoned turtles left by the side of the road in a tank and other animals. Even pet fish can cause expensive environmental damage when released in the wild.

“Pets can become an invasive species problem when owners let them loose. Pets like goldfish may grow much larger when released into the wild and reproduce quickly, disrupting the ecosystem. Under the right conditions, goldfish will take over a fishery, binding up resources that could be used by other species.”

The fishy pets-turned-pests were released into West Newton Lake by a “bucket biologist” more than five years ago. The goldfish threatened both the put and take fishery at West Newton and the trophy fishery at East Newton. The Game and Fish and many voluteers have worked hard to reduce the problem, but short of draining the lake and killing all the stocked fish, the problem continues.

Recently, someone dumped goldfish into Renner Reservoir as well. The Game and Fish has renovated the lake, taking years to drain and rebuild the fishery for warm water species like largemouth bass.

The Park County Animal Shelter has programs to help folks afford to keep their pets during the worst of economic times, including helping to feed or in health care issues. They also sponsor rehoming programs, including foster families.

At the Moyer Animal Shelter, in Powell, founder Elfriede Milburn – requires owners who would like to rehome their pet at the shelter to put an ad in the paper offering the animal for free prior to leaving it at the shelter.

Milburn, who started the shelter 25 years ago, said during the COVID-19 pandemic, it was easy to adopt pets to new families. Now, as the economy is dipping, it’s not so easy. “We don’t have people coming in every day looking for a dog [or cat]. That doesn’t happen now.”

The shelter isn’t overloaded right now, but there have been times when there were so many animals it caused emotional stress on the employees and volunteers at the shelter.

Nan McCann, co-founder of the shelter, has been helping strays for more than 70 years. When she was 5 years old she started making shelters for stray cats out of grocery boxes. She would mow lawns for a quarter to pay for cat food. “I charged a quarter to mow your lawn,” she said.

She, along with everyone who works to save animals, has seen heartbreaking situations. She said she gets by with a little advice she was given by a veterinarian friend.

“I go in with the thought of who can I help today, not about the bad things. That is already done. It helps keep me going,” she said.

Milburn praises the people of Powell for stepping up when the need is there. “Then one day we adopted five dogs in a day,” she said, the memories bringing a smile.

Even those animals that get a second chance at a shelter need help, Good said. “Getting them out of the shelter setting for a week – even for a day – does so much for their mental health.”