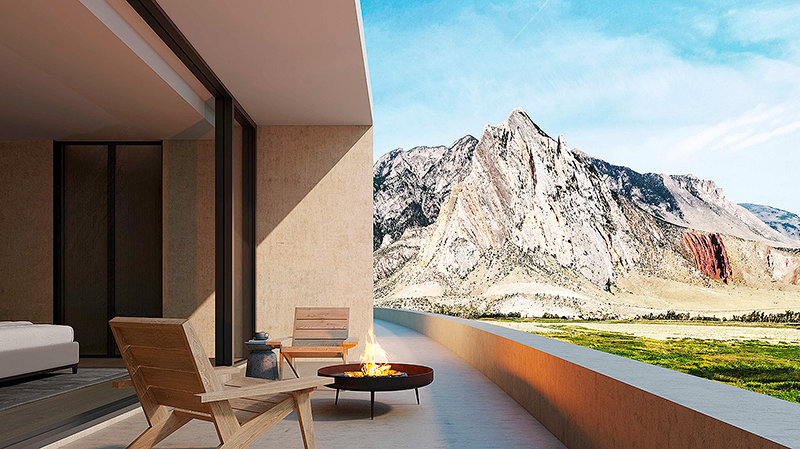 Guests at Soori Wyoming will be ‘encouraged to linger in the outdoors as much as possible to appreciate the great natural beauty and diversity that the canyon mouth has to offer,’ according to a proposal submitted to the county. Before becoming reality, the project needs to clear several hurdles.
Image courtesy SCDA Architects 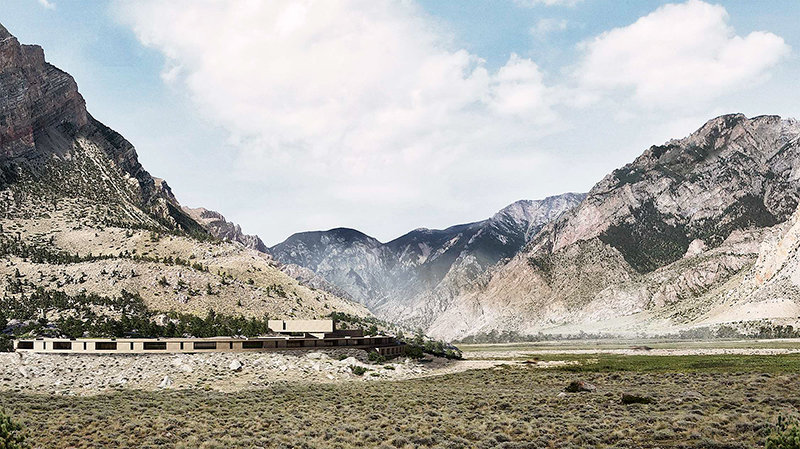 Architect Soo K. Chan says his proposed Soori Wyoming retreat is designed to have a low-key appearance, featuring materials meant to blend in the with the surrounding landscape. Park County Planning and Zoning officials will consider the logistics of the project Wednesday.
Image courtesy SCDA Architects 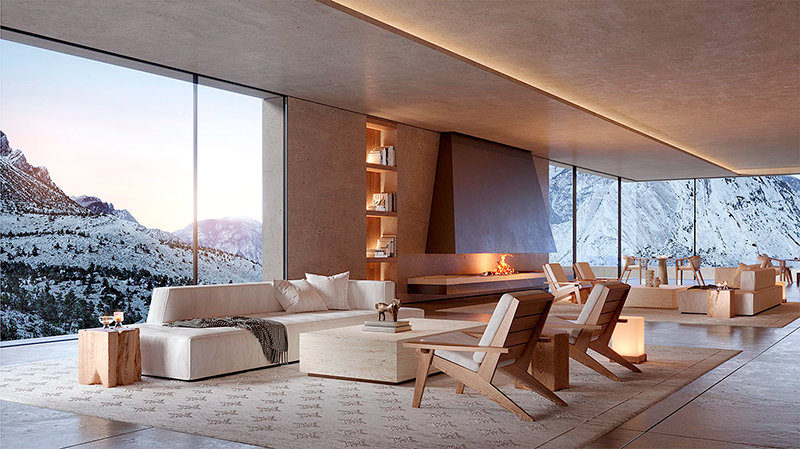 Architect Soo K. Chan has designed high-rise apartments in Singapore, boutique villas in Bali and high-end condominiums in New York City. Now, the award-winning architect is seeking to build a unique resort at the mouth of the Clarks Fork Canyon.

In November, Chan and his New York-based firm submitted an application to construct an “ecologically-empathetic retreat” that would house up to 34 guests at a time in the remote, scenic area. Soori Wyoming will “inspire and empower travelers in the exploration of new ways of creating, thinking and living on our finite, green and blue planet,” according to materials provided to the Park County Planning and Zoning Department.

The submitted design features a “herd” of 11 “cabins,” each offering wide, open views of the surrounding landscape, plus a wood-burning fireplace and outdoor fire pit. The cabins would all be connected to a 14,200 square foot main house, envisioned to contain a dining area, small gym and spa treatment room, plus an outdoor swimming pool and dining terrace.

According to the application, Soori Wyoming is “a provocation of how architecture and design can rally to make palatable off-grid hospitality a real proposition.”

In an interview, Chan said the resort is not a commercial venture, but “an experiment to demonstrate that we can actually have a hotel that comes off the land and is of the land, if possible, and be carbon neutral.”

Given the harsh climate in Clark, and past resistance to projects in the area, “we are realistic enough to kind of know that it will not be that easy; it’s going to be a process,” Chan said. “But we also know that fundamentally, at the core of it, we are trying to do something right.”

The project will get its first public hearing in front of the Park County Planning and Zoning Commission on Wednesday, with a preliminary review of the site plan. Some access issues still need to be worked through, as the access road — which crosses Bureau of Land Management property — may need to be improved for the new use, Planning Director Joy Hill told county commissioners last week; she suggested the BLM could require lengthy environmental analysis and the bridge to the property is in disrepair.

Further, the Wyoming Game and Fish Department has raised some concerns about the project, since it’s located within crucial winter range for elk and near critical areas for mule deer and bighorn sheep. Water and septic plans also remain incomplete, while Hill said last week that there are safety challenges posed by the steep slopes of the nearby canyon.

Still, “we felt that they had enough information that we should proceed with at least the [Planning and Zoning] Commission to see what comes up,” Hill said in an interview last month.

“We do anticipate that there may be some public comment coming in on this use,” she added, noting past opposition to plans to expand a water bottling facility on a neighboring parcel.

Chan said his team is entering the process with an open mind.

“We set out our idea of what we wanted to achieve, but along the way, I think we will have to take in whatever local input and local considerations of place and climate,” he said. “But the goal remains the same, which is to create a resort that is very empathetic to the environment and to climate.”

Chan noted the low-lying structure is designed to fit into the landscape, with the color matching the surrounding stones.

“It’s not going to stand out and we want to make it disappear,” he said, describing it as a minimal, low-key appearance.

In the firm’s permit application to the county, SCDA said its goal is “to preserve, as much as possible, the experience and sense of place of the site as it was first found.”

Chan acquired the 161-acre parcel of land in January 2021, public records indicate, through a limited liability company called Clarks Fork Canyon LLC. He had originally been looking at building a retreat in the Catskill Mountains of New York, but “I’ve always wanted to look into Montana and Wyoming.”

“And this whole COVID two years, you know, you fantasize about being somewhere else,” he said.

When Chan and his son came upon the listing for the property in Clark, “I bought it sight unseen,” he said. On his first visit to the site last summer, “we were not disappointed,” he said.

In looking to build a carbon neutral hotel, “what better place to choose than a really remote beautiful place,” he said, “because then you really have to draw from the land.”

As part of a focus on sustainability and carbon neutrality, Soori Wyoming hopes to draw most of its power from a solar array (with electricity from Rocky Mountain Power provided as needed) while also offering items like biodegradable, recyclable and non-plastic eating and drinking vessels, containers, dispensers, toothbrushes and combs, plus eco-friendly detergents.

Environmental sustainability has been a focus at Soori Bali, a sister resort located along the Indian Ocean and terraced rice fields in Bali, Indonesia. Soori Bali participates in coastal clean-ups, offers rice in exchange for plastic trash that’s collected and helps rescue and release rare baby Olive Ridley turtles — an effort also offered as an activity for resort guests.

Cultural sustainability is an emphasis for the Soori brand as well. Its stated ethos describes projects “crafted from local materials and built by local hands,” with food and drink “drawn from the wellspring of the local community.”

Luxury travel, Chan has said, is about offering an authentic experience, and he believes that starts with hiring local staff and managers.

According to the materials submitted to the county, Soori Wyoming intends to eventually employ 20 full-time workers, including four who will live in a small cabin at the Clark site.

The resort intends to offer guests a lineup of outdoor activities like trout fishing, horseback riding and guided excursions to attractions in Cody, Yellowstone National Park and beyond.

“We plan to be around, kind of get to know people, too,” Yeo added. “I think that’s key — not just kind of come in and do things.”

Chan brings extensive experience in designing ambitious projects around the globe, ranging from skyscrapers to an urban park.

One of his first U.S. ventures, the Soori High Line condominiums in New York City, included some residences with salt water swimming pools just off the living room. It drew coverage in major media outlets like The New York Times.

“The $125 million project ... promises to provide the hard-to-beat thrill of allowing residents to take a dip without having to leave their apartments,” the Times reported in 2014, noting that two-bedroom units started at roughly $3.7 million.

As for Soori Bali — which hosted reality TV stars Kim, Kourtney and Khloe Kardashian in 2018 for Kim’s 38th birthday celebration — its villas and residences were renting for upwards of $600 a night in a recent online price check.

(Another project, a ski resort called Soori Niseko, is also in the works in Japan.)

But Soori Wyoming will be different, Chan said, as the smaller, carbon neutral retreat is intended to be a demonstration, not a commercial venture.

Then there’s the fact that Clark is a far cry from the tropics or a major metropolitan area.

“It is quite a challenge,” Chan acknowledged, but he said his team is approaching the project very cautiously and is prepared to be quite flexible. For instance, he said it’s possible the weather may cause Soori Wyoming to close for the winter months.

“For us the proximity and location doesn’t really matter,” Chan said of choosing such a remote location, “but the quality of the site really matters, big nature matters, and then we try to kind of build around that.”

As of last week, no members of the public had formally weighed in with comments ahead of Wednesday’s Park County Planning and Zoning Commission meeting.

“They may just show up; I don’t know,” Planning Director Hill told commissioners, “or nobody will show up.”

Amid a few other agenda items on Wednesday, the planning board will review Soori Wyoming’s site plan and take any public input before deciding whether to recommend a special use permit for the retreat; it’s being classified as a dude ranch and resort. Ultimately, county commissioners would have the final say on issuing such a permit.

Through the process, Chan said he hopes to show the community that Soori Wyoming is a beneficial project all around.

“This is … a unique opportunity,” he said, “to do something that kind of enhances the reputation of this beautiful place.”