In the Big Horn Basin, … 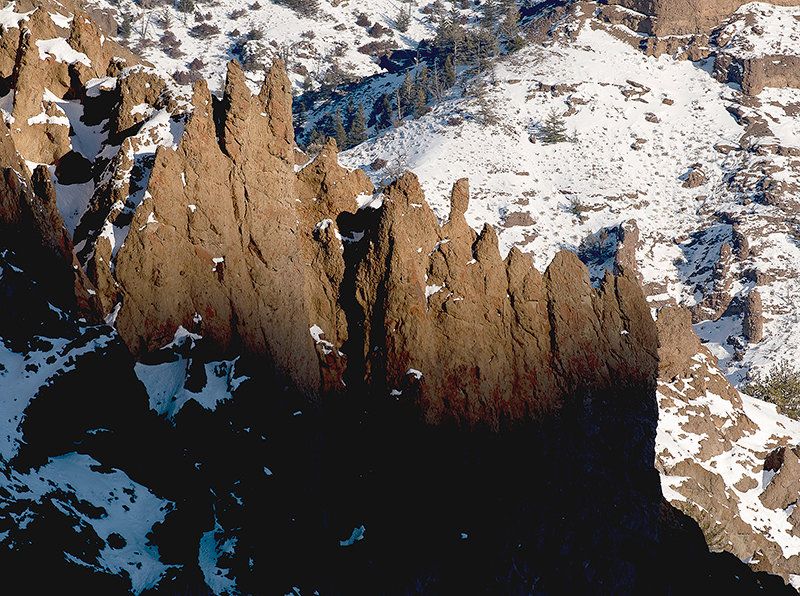 While Park County has been experiencing drought conditions, the snowpack in the area — including in the North Fork area west of Cody — recently improved to 87% to 96% of median moisture levels. The area’s irrigation systems can blunt the effects of a drought on local ag producers, but the dry conditions can still make an impact.
Tribune photo by Mark Davis
Posted Tuesday, January 11, 2022 8:25 am
By Kevin Killough

In the Big Horn Basin, the fairly reliable flow of water from the irrigation systems makes drought less of a concern than in areas that lack irrigation. But the lack of moisture in the soil going into the irrigation season will have its impacts.

“In terms of the drought, it’s a little too early to tell what the impact will be,” said Jeremiah Vardiman, agriculture and horticulture extension educator for the University of Wyoming Extension.

Most of the snow falls in the high country between now and April or May and that snowpack, as it’s called, really sets the stage for the growing season — at least as far as moisture is concerned; there are a lot of other moving parts in agriculture.

Currently, from Yellowstone National Park through the Big Horn Basin, snowpack is about 87% to 96%of the median, which is taken over a 30-year period, from 1991 through 2020.

The snowpack is the biggest contributor to the amount of water in Buffalo Bill Reservoir, which feeds the extensive irrigation system throughout Powell and Heart Mountain. Without water in the reservoir, there’s no water for the fields.

As of the middle of December, the snowpack was about 56% to 78% of the 30-year median, which was a matter of concern. Fortunately, that’s improved.

“The snowpack has come up quite a bit,” said Trent Reed, general manager for the Shoshone Irrigation District.

If the reservoir did become low enough, the Bureau of Reclamation would begin coordinating with the irrigation districts to enforce allotments, which means farmers would have to stick to a strict set of water usage from the system. (The normal allotment is 2 acre feet per 70 acres. That would cover those 70 acres roughly 4 inches deep in water, with around 651,702 gallons.)

Reed said he hasn’t seen that situation in the few years he’s been with the Shoshone district, and he said it’s probably been more than 20 years since the reservoir got that low. In the 1970s, he said there was a particularly bad period when irrigation allotment was severely restricted.

While there’s plenty of time for more precipitation between now and planting season, Vardiman said the soils are particularly dry. That will impact germination when crops get into the ground.

“We’ll probably have to water up all our crops. They just won’t come up from the natural moisture in the soil,” Vardiman said.

Farmers did a lot of field preparation late last year in anticipation of the current dry conditions. Weather is an unpredictable input every year, and farmers have to constantly adapt to those varying conditions.

The Buffalo Bill Reservoir has been feeding water into the system fairly reliably through the last couple dry years, but the Basin’s agricultural industry can be impacted by regional drought conditions.

“We probably didn’t get the highest yields from our hay production, but we still got three cuttings,” Vardiman said, meaning most fields could be harvested three times in the season.

For areas of drought-stricken Montana, they didn’t have an irrigation system to keep hay growing. Their rangelands also greatly suffered from the dry conditions, with pest populations exploding as they often do in drought.

“Montana got hit really hard,” Vardiman said. “I heard stories in Montana that grasshoppers ate every blade of forage available for their livestock.”

If the region recovers from the drought, the prices will come down, but it will likely take a couple of years, at least.

Vardiman expects the hay prices to stay up this year. People are still struggling to find hay, so they will likely buy early this year to secure a feed source.

While the arid conditions of northwest Wyoming present a number of challenges for farmers, the region is quite fortunate to have a fairly consistent source of water.

“These types of conditions, it really pays to be an irrigated operation,” Vardiman said.