A concrete mixer crashed on Wyo. Highway 32 southeast of Powell Friday morning, but despite initial fears of serious injuries, the driver was able to go home later in the day. 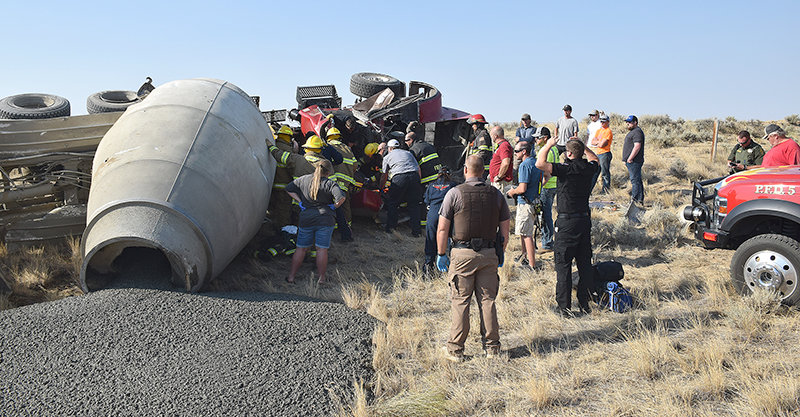 First responders work to free the driver from a concrete mixer that rolled along Wyo. Highway 32 north of Emblem on Friday morning. The driver was air lifted to a Billings hospital, but was able to be released later in the day.
Tribune photo by Toby Bonner
Posted Tuesday, August 17, 2021 8:25 am
By CJ Baker

A concrete mixer crashed on Wyo. Highway 32 southeast of Powell Friday morning, but despite initial fears of serious injuries, the driver was able to go home later in the day.

The Big Horn Redi Mix truck had been heading from Powell to Burlington and was several miles south of Wyo. 32’s intersection with Wyo. 295 when a tire blew out. That caused the vehicle to crash and roll over, coming to rest off the highway with the driver pinned inside.

First responders were summoned to the scene around 8:50 a.m. and members of the Powell Volunteer Fire Department worked to extricate the driver from the wreckage. The man broke his shoulder blade and suffered a gash to his head, which prompted medical personnel to call a Guardian Flight helicopter that took him to a Billings hospital. However, the driver — who was wearing his seat belt — was able to be released later in the day, said Nate Horning, the manager of Big Horn Redi Mix’s Powell plant.

“He [came] out all right,” Horning said of the driver, adding that everyone at the company is “very pleased” the injuries didn’t prove more severe.

“You can always replace a truck,” Horning said, “but the driver, he’s irreplaceable.”

The Wyoming Highway Patrol was still completing its report on the incident as of Monday morning.