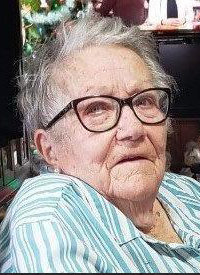 Dorothy Louise Thull was born on May 13, 1934, to Selma and Sigar Hoines in Castagne, Montana. She had two sisters and one brother. In her youth, Dorothy enjoyed riding her horse on Red Lodge Creek. She set the standard for brazen behavior and was an example for future generations.

Once she grew up, she married Richard Cecil Thull on April 24, 1952, in Red Lodge, Montana. Dorothy and Richard had one son, Steve Thull, and four daughters: Marlene Long, Marilyn Nelson, Carolyn Manweiler and Verna Thull.

Dorothy and Richard owned a farm in Clark where they raised their children and livestock, before moving to Powell. Dorothy devoted her life to her children and after her children were grown, she worked at Pamida for 25 years. Upon retiring from Pamida, Dorothy raised chickens and grandchildren, both of which she loved dearly.

Dorothy was known for her belief in integrity. She sold her eggs from her chickens based on the honor system and believed in the goodness of people. Dorothy loved her dogs, fishing, the mountain, gardening, crafting and being ornery.

Dorothy and Richard even spent a few summers camp hosting at various campgrounds. Nothing made her happier than her yearly trip to Yellowstone National Park.

A celebration of life will be held at the Dead Indian Trailhead once the weather permits and family are able to come together.