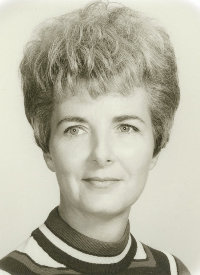 Donna was born in Morgantown, West Virginia, on Jan. 24, 1927, to Merritt C. Davis and Dessie E. Lewis. She graduated from Morgantown High School in 1945 with honors. She was always proud to be a coal miner’s daughter.

Upon graduation, Donna went to work for Cowan Bakery Company as a bookkeeper, where she met the love of her life, Reginald Denny Hall. Denny was on leave from the Army visiting his father who was a baker there. After a short courtship, they fell in love and were married, April 20, 1946. They were married 67 1/2 years. They raised three children: Allen Kent, Patricia “Patty” Louise and Reginald “Denny” Jr.

In 1962, Donna decided to go back to work as a bookkeeper for Rosedale Coal Corporation. As the company continued to grow, she became the secretary and treasurer for the board of directors for a number of coal companies under the corporation before she retired in 1988.

Donna and Denny were members of Goshen Baptist Church of Morgantown, West Virginia. She was involved in all phases of church work and has continued to support the Goshen Church throughout her life. In 1975, the American Baptist Women’s Ministries (ABWM) awarded her a scholarship to visit their mission fields. Donna loved working for the Lord. In 1994, after moving to Powell, Donna attended and supported the First United Methodist Church.

One of the highlights of Donna’s life was visiting with her children, grandchildren, great-grandchildren, friends, and listening to all their dreams and accomplishments. Another highlight was being a talented artist. She specialized in portraits, still lifes and landscapes. She also taught her husband to paint when he was 72 years old. Many of their paintings are on walls throughout the United States. Some of her drawings were used for the ABWM magazines, bulletins and cookbook covers. She also loved making her own greeting cards and sending them to friends.

In June 2015, Donna moved to The Heartland Assisted Living to be among good friends and caring staff. She looked forward to weekly Bible studies, card games and art classes that she taught to residents and staff.

Memorial services will be held at 10 a.m., Saturday, June 12, 2021, at the First United Methodist Church in Powell.

Thompson Funeral Home is assisting the family with arrangements and condolences may be sent to www.thompsonfuneral.net or PO Box 807, Powell, WY 82435.