Ben Borcher was on the water with his son, Christian. Fishing is a long tradition in the family and on this day, it was just the two of them in a small raft on Cody Reservoir.

Alongside Ben was a … 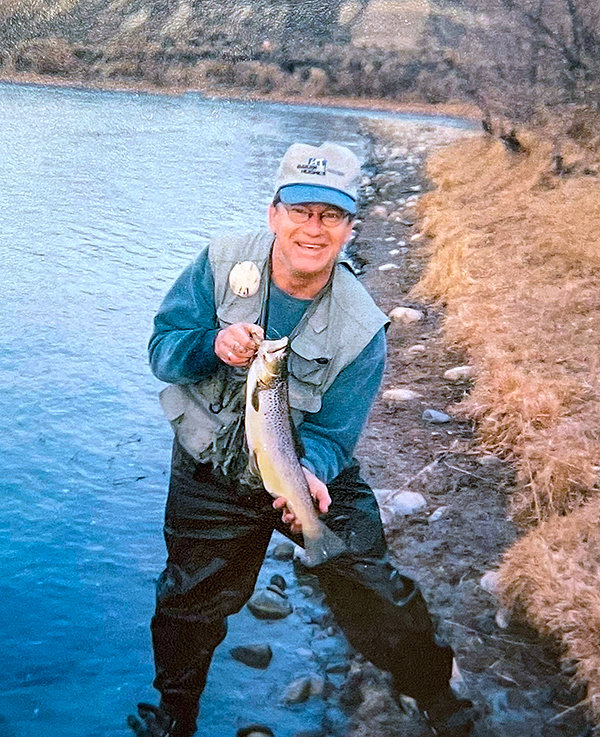 Lynn Borcher loved to fish Wyoming waters. Prior to his death in 2008, he was gifted a fly rod by his family and he used it as much as possible on his trips. His son Ben inherited the cherished rod and reel combo.
Courtesy photo 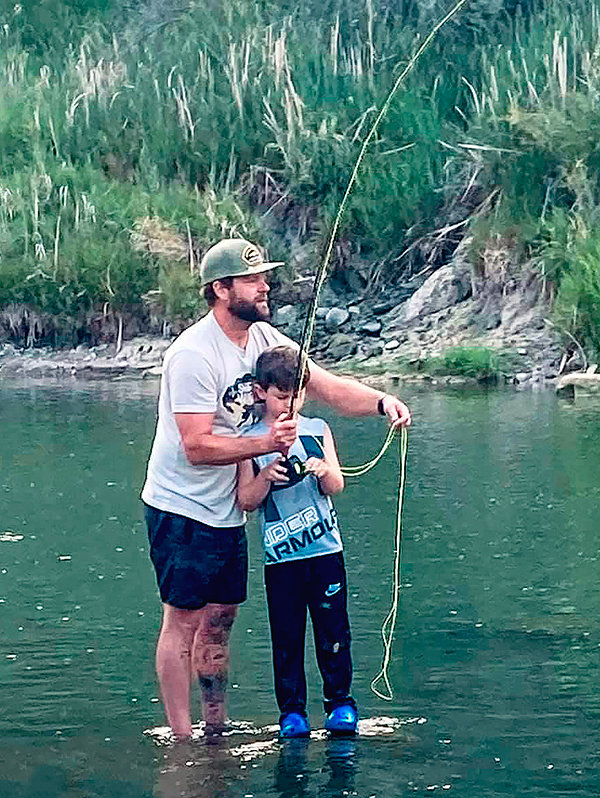 Ben and Christian Borcher fish with a fly pole inherited from Lynn Borcher, who died on a fishing trip in 2008. Recently the rod was rescued from the bottom of the Cody Reservoir after being lost on a fishing trip.
Courtesy photo 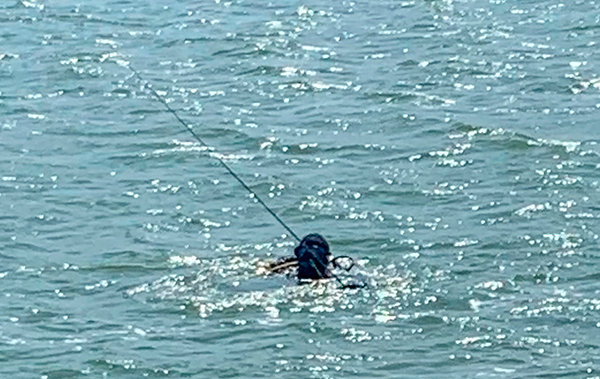 Paul Brock emerges from Cody Reservoir, carrying a lost fly rod and reel lost by Ben Borcher. Borcher said Brock looked like a narwhal when he came to the surface, pole first.
Courtesy photo
Previous Next
Posted Tuesday, December 7, 2021 8:20 am
By Mark Davis

Ben Borcher was on the water with his son, Christian. Fishing is a long tradition in the family and on this day, it was just the two of them in a small raft on Cody Reservoir.

Alongside Ben was a very special fly fishing rig. He had helped pick it out for his father’s 59th birthday. It was the nicest fishing pole Lynn Borcher had ever owned.

“He never had great gear, but he loved to fish,” Ben said.

Shortly after receiving the gift, Lynn was out fishing on the North Fork in a deep hole near a rock formation locals call “Laughing Pig.” He was on a rare Monday trip instead of in his Powell office selling insurance. After a great day on the river with his brother, Kenny, the 59-year-old stopped to chat on the trail leading back to the truck — and he fell. Lynn suffered a massive heart attack, his fishing gear in his hands.

“It was the best worst thing that could have happened,” Ben said. “He died doing what he loved.”

After his father’s untimely death in 2008, Ben wasn’t about to retire his father’s fishing gear. Despite the sentimental value, he wanted to keep it in the rotation. Every time he held it happy memories of time on the water with his father would rush in.

But on this day on the reservoir — Friday the 13th — the happy memories suffered a setback. While paddling to a good spot, the straps securing his father’s fly rod to the raft came loose and it sank to the bottom of the lake. Ben immediately went in after it.

“I tried to jump in and grab it, but it sank too fast. Lost my shoes, too,” he said.

Efforts to rescue the equipment failed that day, but he didn’t give up. He and his children, including his daughters Rowan and Peyton, returned several times to try and snag it with a casting rod to no avail.

“I was pretty much at peace with not getting it back, but still miffed at myself that I had lost it in such a careless way,” Ben said. “I knew I’d never be lucky enough to snag it.”

He eventually called off his search. But then his wife, Jessi, took to social media and told the story of the missing pole. Some locals took to the water, also trying to snag the rod and reel, but nobody could get a hook on it.

Then Jessi got a message from Kris Brock who tagged her husband and expert scuba diver, Paul, and suggested he could help. Ben made the call immediately.

In the high desert region of northwest Wyoming, Brock is a master diver. He used to run a local dive shop, but it has since transitioned into a scuba-themed travel company called Yellowstone Divers LLC. in Cody. He travels internationally, taking clients on bucket-list underwater adventures.

Paul still dives in Wyoming, but much of his time in the water in the Cowboy State is spent volunteering his services for Park County Search and Rescue. Kris volunteers for the team as well, running trained cadaver dogs on rescue and recovery missions throughout the area.

Unfortunately, Paul has yet to have the opportunity to make a rescue in his 15 years of volunteering for the organization.

“They’ve all been recoveries,” he said of his many missions across the West.

Paul has traveled to several states to assist in human and evidence recoveries. Despite never saving a victim, he said “it’s important to bring [the victims] home so the family can have closure.”

Park County Sheriff Scott Steward has been very impressed with the husband and wife team.

“With his wife being on [Search and Rescue] with her dogs and Paul with scuba, they make great assets,” Steward said, adding, “It’s very important to have a master diver. They are in short supply in this area. We have very few on [the team] that are scuba qualified and we no longer maintain any scuba equipment.”

Soon after making contact, Ben and Paul headed to the small, but deep reservoir together. Ben watched Paul disappear into the blackness of the deep water while attached to a rope. The idea was, if Ben thought Paul was out of the general area he thought the pole would be, he’d give the rope a yank.

Under the water, Paul was in absolute darkness. It might freak out some folks, but it was nothing new for Paul. Much of his time underwater with Search and Rescue is in murky water with very low visibility. “I’m out there searching underwater and you can’t see a thing. So I’m just feeling my way along.”

While keeping his eyes on the bubbles, Borcher gave the rope a yank. Paul surfaced with one of Borcher’s lost shoes in his hand.

Knowing they were in the right area, Paul went back for another pass. A short time later, Brock slowly worked his way to the surface of the dark water with the long pole leading the way — “like a narwhal,” Borcher said.

“It was amazing,” Brock said. “When I came out with his fishing rod he was ecstatic. I found his other shoe, too.”

Finally reunited with his father’s fishing gear, Borcher plans to continue to use it. But he’ll be a little more careful in the future, holding on a little tighter to the fly rod and his fond memories of his father.