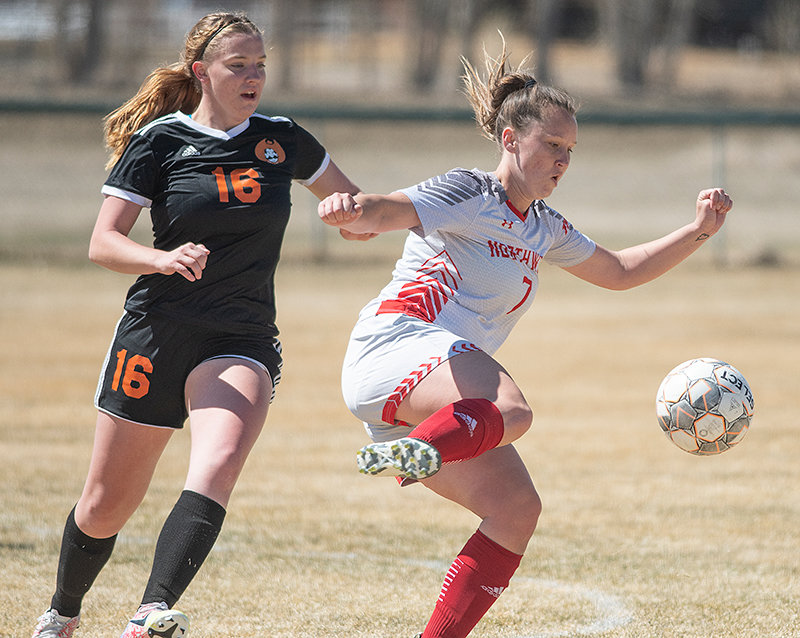 Shyley Hunter kicks a ball out of mid-air in Northwest’s game against Central Wyoming earlier this year. Despite falling 5-0 to LCCC in the first round of the Region IX Tournament, the Trappers fought well in the second half.
Tribune photo by Carson Field
Posted Thursday, May 20, 2021 8:05 am
By Carson Field

The first 45 minutes of Northwest College’s Region IX playoff game against Laramie County Community College weren’t pretty. NWC trailed 4-0 and struggled to compete with the Golden Eagles in any area.

While the first-round contest was more or less out of reach at the break, head coach Rob Hill preached finishing strong.

“We talked about playing with pride,” Hill said. “I just addressed our issues. We were panicking and just kicking the ball away. We didn’t want to just lay down, even though the game was pretty much over.”

After returning from the locker room, the Trappers’ play improved. They weren’t able to shrink the margin, but they held LCCC to just one score in the second half, losing 5-0.

The Golden Eagles’ only second-half goal came in the 85th minute after 40 minutes of sound defense from NWC. Offensively, the Trappers saw a handful of offensive opportunities and shots on goal, which were non-existent in the first half.

More than anything, a mental adjustment paid dividends for NWC in the final 45 minutes.

“They showed who they really are in the second half,” Hill said. “I was super proud of their effort — it was night and day better.”

With just one loss all season, LCCC entered the tournament ranked No. 6 in the NJCAA rankings. It was going to be a challenging match, but Hill said his team would have made things far more interesting if not for the sluggish start.

“It certainly would have been a better all-around performance,” Hill said. “We were not present in the game early on, and it showed.”

The defeat knocked Northwest out of the regional tourney, and with the loss, the Trappers finished the year 1-11.

When Hill convened with his team after the final whistle, he told his student-athletes not to hang their heads. Even in a losing season and a disappointing first half in the last game of the year, the team surged past various obstacles, ranging from the dismissal of the former coach weeks before the season, injuries and more.

“They’ve overcome so much,” said Hill. “They went loss after loss, never quit, never gave up. They stuck with it, and these are things they are going to remember.”

While Hill said he’s proud of his team’s efforts throughout the season, he has lofty expectations for where he plans on taking the program. Between a strong corps of returners who don’t want to experience another losing campaign and a strong crop of incoming freshmen, he is confident that fall 2021 can be a thrilling new chapter for Northwest College women’s soccer.

“It’s all about holding the girls accountable,” Hill said. “There are things in the offseason I expect them to do, and I think we’ve got some players who will have benefitted from playing. And I’ve spoken to a number of tough players who will come in and do a good job.”