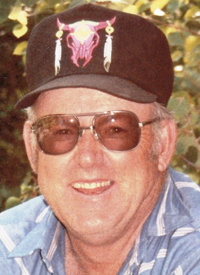 He was born April 18, 1940, in Basin, Wyoming, to his loving parents Ed and Erma Fontella Clark. Dell was then proceeded by two sisters, Carol Sue and June, and a younger brother Johnnie. They were raised on a farm where he was taught lifelong skills and how to work hard.

Dell finished all his schooling in Manderson, Wyoming, and graduated in 1958. After graduation he and his uncle, Jay Clark, went to Meeteetse to help build the Meeteetse High School. This is where he met his future wife, Alice.

On April 28, 1962, Dell married Alice Marie Phelps in Greybull, Wyoming. He celebrated 58 years of marriage to her. Following this reunion Dell and Alice resided in Manderson, where they were blessed with three daughters, Chadell Marie, Brandy Lynn and Ivy Jo. In November 1965 they moved their little family to Gillette, Wyoming, where their two sons Darin Dwayne and Earl Paul were born. Soon after the youngest daughter Misty Dawn arrived completing the family. He raised their family for 48 years in Gillette until September 2014, when Dell and Alice relocated to Lovell, to live with their daughter Chadell and her husband Eric due to health concerns.

Dell always had a great work ethic. This ethic enabled him to gain very valuable experiences and knowledge thoughout his employment years. It started on the family farm working with animals, learning different varieties of grains, to growing crops and running the required equipment. Dell then discovered his talent in construction, which is what led to helping build the high school in Meeteetse. From there he went into the field service with Baroid Company.

He worked on drilling and drove a truck. He was then transferred by Baroid Company to Gillette, to help run the plant there. With his growing family Dell decided to make a company change and joined Gem Mobil, where he was lead serviceman. Following his service to Gem Mobil he made a career change to Stahla Mobile Homes, where he did delivery and maintenance of their mobile homes. Dell could park a mobile home in just about any area. If a driver couldn’t back a trailer in a lot, they would call him, and he got it accomplished. In 1978 Dell joined the Black Thunder Coal Mine, where he was plant maintenance supervisor for 28 years.

After his dedicated service to Black Thunder, and raising his six children, he determined it was his turn to retire. Although easier said than done for such a hardworking man like Dell, he decided to go back to the work field and finished his employment at Knecht Home Center as a customer relations representative.

Dell was a quiet man, but always spoke with understanding and a caring tone. He had a quick wit and love for all jokes. He was always willing to help, and you never heard the word “no.” It didn’t matter what it was he was there for you. He was a devoted husband, father, brother, grandfather and friend. He worked very hard to provide in different ways for everyone.

Dell loved camping. He always looked forward to yearly family reunions and enjoyed taking long drives to see wildlife. He also loved making small projects out of wood, such as wood trucks, water wells and trains. He also made airplanes out of pop cans. He spent his free time in the garage tinkering on something or some project. He started the process of restoring older cars, which lead him into purchasing a 1960 Thunderbird that was his pride and joy. Dell loved his country music and preferred to still listen to it on his 8-track player or record player. When he wasn’t in his garage, you could find him doing crossword puzzles or playing solitaire. He made a lot of lifelong friends through his employment career and always kept close to his family.

Dell is survived by his daughters, Chadell (Eric) Smith of Lovell, Brandy McKee of Gillette, Ivy Serna of Gillette, and Misty (Scot) Henaghan of Gillette; his two sons, Darin Rubis of Central Lake, Michigan, and Earl (Wendy) Rubis of Murray, Utah; and his two sisters, Carol Sue Morris of Thorton, Colorado, and June Allen of Thermopolis, Wyoming. He was also blessed with 24 grandchildren 35 great-grandchildren, in addition to many cousins.

He was preceded in death by his wife Alice.