CWD solutions may be tough pill to swallow

As chronic wasting disease continues to spread, officials look for ways to mitigate its effect

One by one, as Wyoming experts approached the podium at April’s Wyoming Game and Fish Commission meeting, it became apparent attempts to battle chronic wasting disease in the state are going to …

CWD solutions may be tough pill to swallow

As chronic wasting disease continues to spread, officials look for ways to mitigate its effect 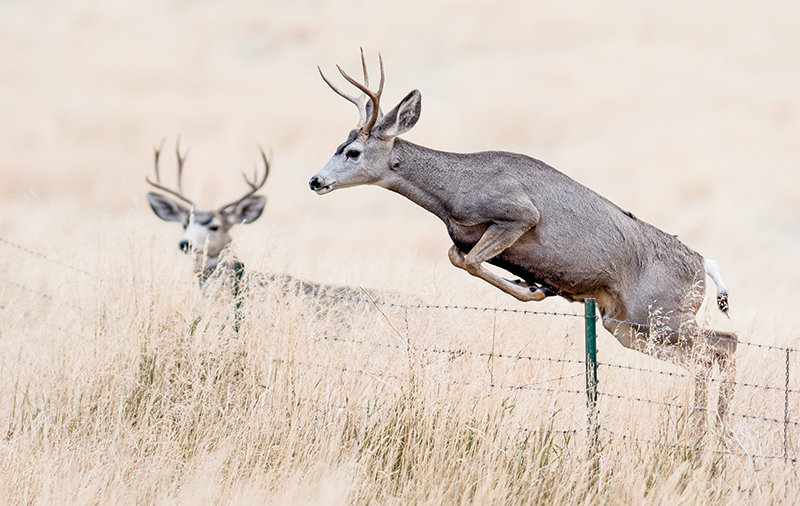 Mule deer bucks look to jump a fence while moving to a new field during a previous hunting season near Meeteetse. Chronic wasting disease affects bucks in some Wyoming hunt units nearly twice as much as their female counterparts, according to research done by the Wyoming Game and Fish Department. White-tailed deer, elk, moose and pronghorn are also in danger of contracting the fatal disease.
Tribune photo by Mark Davis
Posted Thursday, April 28, 2022 8:15 am
By Mark Davis

One by one, as Wyoming experts approached the podium at April’s Wyoming Game and Fish Commission meeting, it became apparent attempts to battle chronic wasting disease in the state are going to hurt.

Without action, the fatal disease can spread quickly and infect the majority of animals in a herd. Yet, a consensus of researchers suggests one of the most effective ways to fight high prevalence rates of the disease is to at least temporarily decrease populations of cervids on the landscape — especially mule and white-tailed deer.

If a population decrease was short-term issue, the process of significantly reducing populations would be an easier sell to the public. But the disease-causing misshapen prions can remain active in the environment for well over a decade — even after an infected animal has died and decomposed. It’s a fight that will continue on the landscape into the foreseeable future, officials warn.

Current testing shows 66% of mature bucks in the Project Herd are infected with the disease. The unit encompasses the communities of Riverton and Lander. It’s also prevalent in the Big Horn Basin, although not at such high rates.

In the Shoshone River herd unit, testing has found 35% of adult mule deer bucks have been infected with the disease. Infection rates are deceptive because deer can look perfectly healthy up until the final stages and be dead the next week, former commission president Pete Dube testified after joining Game and Fish in collaring deer for surveillance purposes.

“We collared one doe. The whole team was there. I mean, she was fat, she looked great. She looked really good. Nobody had any inclination [she was CWD positive]. And within a week, she was dead,” he said.

Without action, Binfet warned the disease could decimate treasured herds. “When you’re implementing [population reduction] strategies in herds with less than a 5% probability, they’re more likely to be successful. The cat’s not totally out of the bag at that point. But when you get to these higher prevalence rates, it may be too late.”

There is no known treatment, but testing is quickly improving, said Dr. Samantha Allen, the state’s wildlife veterinarian. A promising new test called RT-QuIC uses nanoparticles of gold to help achieve fast results, but has yet to be approved by the Federal Drug Administration.

Surveillance has also improved understanding of how deer might catch the disease environmentally. The department has taken more than a million photographs using automated scout cameras of deer at 49 separate salt licks and seven water sites. The analysis of the photos may give a clue to the disease spread by saliva, feces, close contact or prions shed in the environment as the disease takes its course and after death.

Typically, an infected deer can live between two to four years seemingly unaffected. They look emaciated, drool and appear to be unaware of their surroundings in the short, final stage of the disease.

Another disease, epizootic hemorrhagic disease, which is caused by the bite of a nasty midge that becomes more prevalent during dry seasons, has wiped out a lot of white-tailed deer and pronghorn in the state. “Multiple samples from dead deer and pronghorn confirmed the outbreak in the Arvada area as well as areas near Douglas, Laramie and Cheyenne,” the department reported last August.

Ironically, the natural die-off may help the area stave off higher rates of CWD. EHD “kind of resets the clock, so to speak, on this herd,” Binfet said.

“It’s basically kind of like a mother nature treatment for us, you know, akin to, like, say, severe winter loss. It’ll be interesting to see what we can learn from measuring prevalence down the road after we lost such a substantial part of that herd.”

The promise of better surveillance and testing kits is the thinnest of a silver lining in the department’s effort. More labor and expensive laboratory space is needed to continue or increase the amount of testing the department can do.

The department completed just under 7,000 tests on harvested animals, roadkill and targeted deer and elk last year. The tests revealed about 10% of the animals tested were positive for CWD.