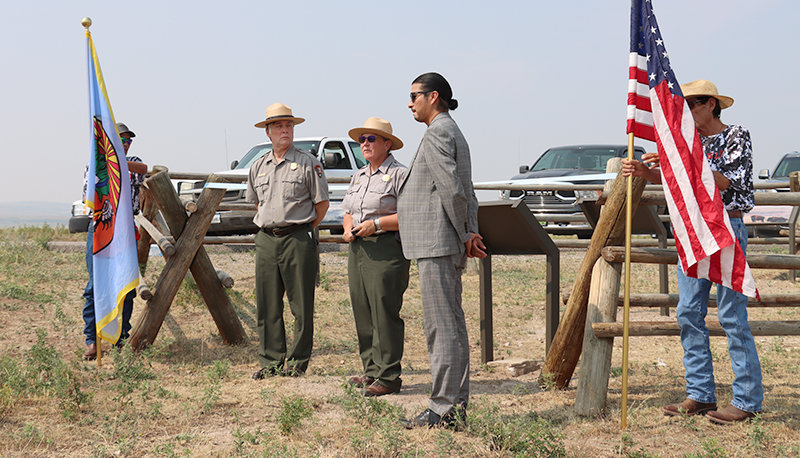 Officials from the Crow Tribe and Bighorn Canyon National Recreation Area cut the ribbon on a revitalized Four Winds Interpretive Exhibit on July 27. The exhibit honors the traditional importance of the four directions while sharing history and cultural stories of the tribe.
Photo courtesy Darlene Mathieu, National Park Service 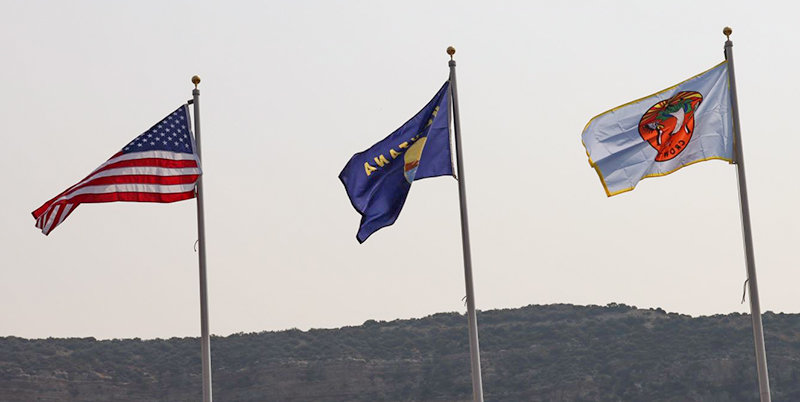 To honor the Crow Tribe’s request to fly the Crow Flag at the Ok-A-Beh Marina, park staff installed three new flag poles at the marina. Those poles, along with a Four Winds interpretive exhibit, were formally dedicated at a July 27 event.

The flag ceremony opened with a prayer by Mary Louise LaForge with the Crow Tribe Veterans Office. Secretary Levi Black Eagle and Superintendent James Hill both gave opening remarks emphasizing the importance of the Crow Tribe and National Park Service to continue efforts to collaborate to present stories and care for the land.

The second half of the ceremony was conducted at the Four Winds Interpretive Exhibit, which was first installed over 20 years ago. This exhibit honors the traditional importance of the four directions while also sharing history and cultural stories of the Crow Tribe. The original exhibit had faded over time and was hard to read, so park staff worked with the Crow Tribe to refresh the exhibit. Black Eagle and Hill cut the ribbon, opening the exhibit once again to the public.

“It is my sincere hope that the dedication was the first of many collaborative events with the Crow Nation and other tribes, to present the tapestry of stories, experiences, and knowledge indigenous to this place,” Hill said.