David Rael’s eyes light up on the Fourth of July like a kid left unsupervised with a sparkler for the first time. He and wife, Jennie, love Independence Day. 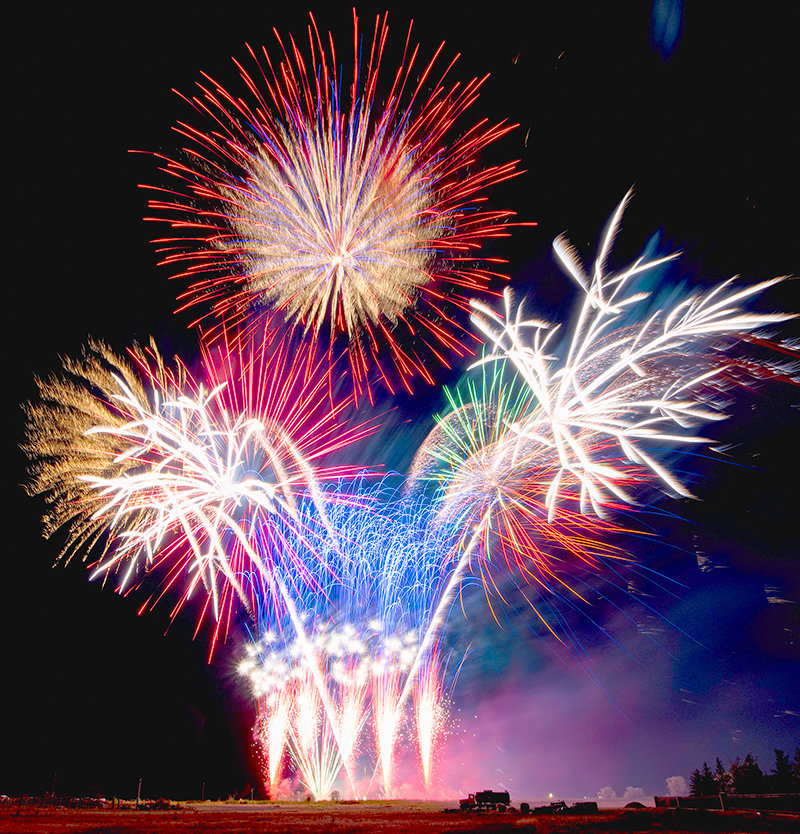 Fireworks light up the sky around Cowley Sunday night, during an Independence Day celebration. The annual event, hosted by David and Jennie Rael, returned in full force after being limited by COVID-19 a year ago.
Tribune photo by Mark Davis 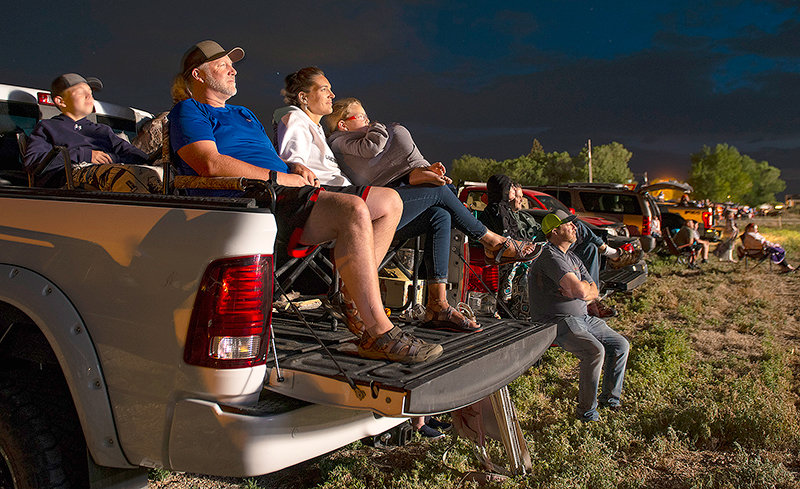 From left, Luke (in back), Cody, Angela, Taya (on lap) and Beau Schatz (not pictured), along with Casey Schatz (in the chair), watch Sunday night’s fireworks display in Cowley. The event was dedicated in part to Cody and Casey’s father, Art, who died in February.
Tribune photo by Mark Davis 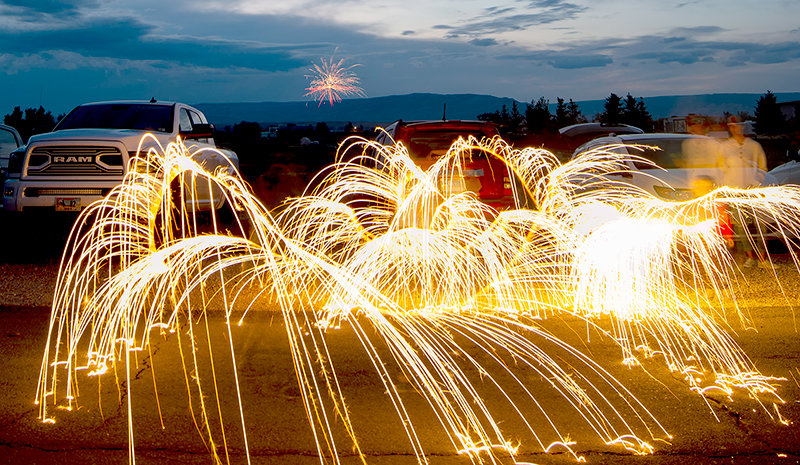 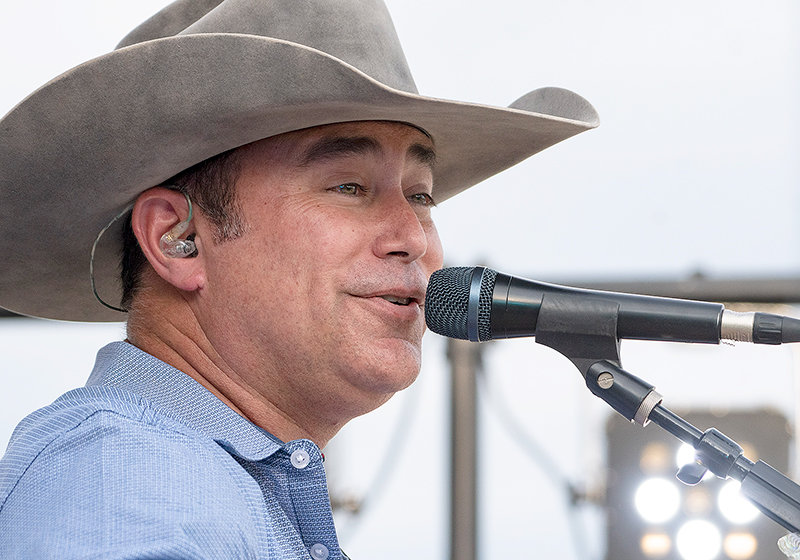 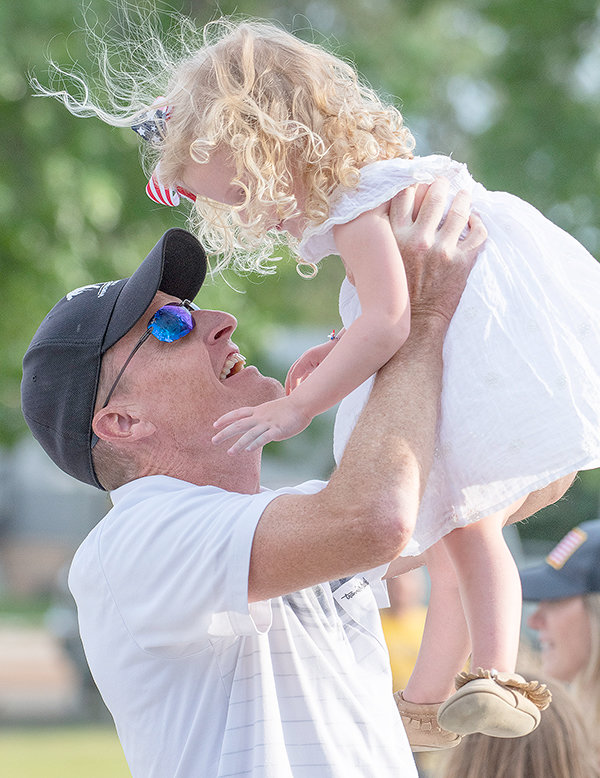 David Rael’s eyes light up on the Fourth of July like a kid left unsupervised with a sparkler for the first time. He and wife, Jennie, love Independence Day.

For the past 34 years, Rael’s company, S&L Industrial, has sponsored a celebration for family and friends, including one of the best fireworks shows in the Big Horn Basin. And the Raels have a lot of friends: This year they served ice cream and invited the entire Basin.

There were 13 flavors complete with multiple toppings. Country singer Harry Luge sang and played guitar while folks danced or watched with dessert in hand from lawn chairs. One of the Raels’ friends, NFL football coach John Fassel, came a long way for the party in Cowley.

Fassel is special teams coordinator for the Dallas Cowboys, but previously coached with the Baltimore Ravens, Oakland Raiders and Los Angeles Rams. Those who spend even a small amount of time with David Rael know he’s Wyoming’s biggest Rams fan.

“Our friendship goes beyond the Rams,” Fassel said. “We became great friends, and his team can always be the Rams. Mine, as a coach, has to change.”

John is the son of Jim Fassel, a long-time NFL and collegiate head coach, who passed away less than a month ago at the age of 74.

“While our dad will be remembered as a long time face and fan in the football world, his legacy will live forever in our hearts as the greatest Dad and Grandpa of all time,” John Fassel said June 7.

John Fassel said he was never pushed into athletics by his father, “but he did give me access to the locker room and practices,” which helped in the transition.

Fassel would love to follow in his father’s footsteps. He was announced as the interim head coach for the Rams in 2016, but it only lasted for a day, when a new coach was hired and Fassel returned to the coaching staff.

Last year the Raels’ Independence Day party had to be partially canceled due to the COVID-19 pandemic and after one of the operators of Pyrotech Professionals was injured in an accident..

This year the Raels dedicated the fireworks show in honor of Jim Fassel and Art Schatz, a friend who died from COVID-19 in Powell in February.

“This is our post-COVID party,” Rael said. “This is for them.”

People lined up on every road in every direction near Cowley for the 10:15 p.m. fireworks display. The rockets started on time, but then technical difficulties stopped the show as heavy wind blew in from the west. An occasional firework would go off, sent up by neighboring parties or from the official launching pad north of town.

A long stretch without fireworks had people in the audience confused. Then American Pie came on the radio — part of the choreography of the show’s broadcast — as the previously rowdy crowd grew silent. Angela Schatz, daughter-in-law of Art Schatz, began to sing, refusing to waver through an entire verse without folks joining in.

“And I knew if I had my chance

That I could make those people dance

And maybe they’d be happy for a while,” the song goes.

By the second verse you could hear others joining in — some sounded timid, others more bold. Angela Schatz’s sweet voice grew louder by the time the song was near its end.

Drove my Chevy to the levee, but the levee was dry

Them good ol’ boys were drinkin’ whiskey and rye

Singin’, ‘This’ll be the day that I die,’” the song continued, with Angela Schatz leading the small and mostly in tune chorus in groups around her.

By the time the song was over, her singing had lifted the spirits of those nearby. Then, without warning, the fireworks once again blasted off and the dark of night gave way to red, white and blue explosions.

County’s future: Burns works to gather input from residents in and outside Powell to help land use plan