Fueled by an influx of people moving in from other states, Park County’s real estate market boomed last year, driving up the prices of local homes and land.

Higher property values can be a … 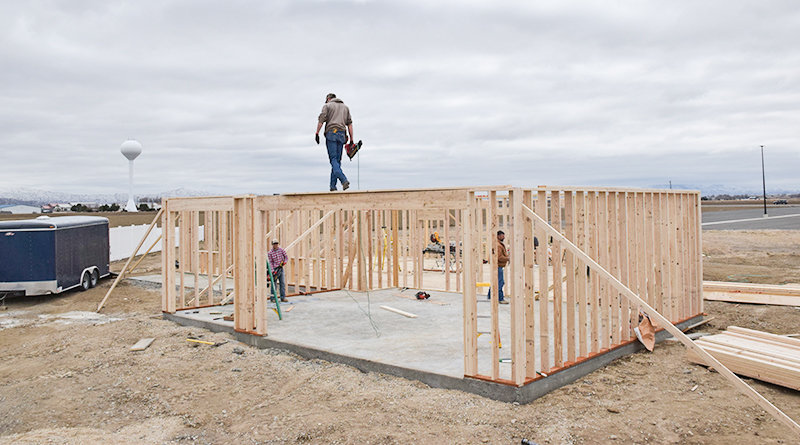 A crew with Smooth Edge Custom Construction works on a new home in the Shoopman subdivision on Maple Court. Real estate sales boomed in Park County last year and development has been surging. The surge in the market boosted property values — and, soon, taxes for owners.
Tribune photo by Toby Bonner
Posted Tuesday, May 11, 2021 8:25 am
By CJ Baker

Fueled by an influx of people moving in from other states, Park County’s real estate market boomed last year, driving up the prices of local homes and land.

Higher property values can be a good thing for owners looking to build equity or to sell, while making housing tougher to secure and afford. But it also means something else: “People’s taxes are going up,” said Park County Assessor Pat Meyer.

In the coming days, local residents will begin receiving their assessment schedules in the mail, which lists how their properties are being valued for tax purposes. Meyer said he took a conservative approach in assessing local properties, but “the market is the market.”

“Property is selling for a lot more than what we had been valuing it at,” Meyer said. He called the 2020 market out of the norm.

The assessor has been valuing local properties for more than three decades and he’s seen years where values have spiked 25-30%, but he said, “it’s been awhile.” For example, when home prices crashed across the nation in the mid-2000s, Park County’s market stayed fairly steady.

That wasn’t the case last year. Meyer said he and his staff heard many tales of bidding wars, sellers getting offers above their asking price and properties selling in a matter of hours.

Whether they are seeking lower taxes, a second home or wanting to get away from strict COVID-19 restrictions in big cities, “a lot of people are moving here from out of state and paying cash for a full asking price,” Meyer said.

Anecdotal accounts from realtors and Park County voter registration data points to an increase in people coming from places like California, Colorado and Washington state. For example, a total of 230 ex-Californians registered to vote in the county last year — about a threefold increase from the last presidential election in 2016.

“Those people in California, they sell their house for over a million [dollars] and can get three times the house for that” in Park County, Meyer said.

He added that he did not include the “crazy sales” when coming up with his valuations — for example, he excluded a sale in which a buyer quickly paid more than $1 million for property assessed around $500,000.

“When you’re bidding on stuff and you haven’t even seen it, you’re not very knowledgeable about the market here,” Meyer said.

Data from the assessor’s office indicates that the biggest jump in sales came among homes priced in the low range.

The median sales price of homes within the City of Cody jumped to $280,000 — a more than $20,000 increase. Homes in the City of Powell remain more than 37% cheaper than those in Cody on average, but the median sales price in Powell rose to $204,000 — a jump of $14,000. Rural Powell saw the most modest bump in sale prices while the North and South Forks saw the biggest increase: The number of sales in those areas west of Cody rose by nearly a third and the median price jumped by $42,500, to a new mark of $457,000.

Meyer said he took a long hard look at the market data and “could not ignore the obvious jump in sale prices.” That forced him to revise his initial estimates. Last month, he predicted that the county’s property tax base would total around $604 million this year. However, thanks to the increases in local residential, commercial and industrial properties, he said the assessed valuation now looks to come in around $629 million. Because of declining oil and gas production, the tax base still shrank from $706 million a year ago, but not as much as property tax-collecting local governments had feared.

Beyond the jump in real estate sales, Meyer noted that new construction and development has also skyrocketed in the county. In April, the Park County Planning and Zoning Department — which oversees new structures in rural parts of the county — issued 71 building permits for various projects; it was the busiest month in at least the last five years, if not ever.

The surge in development has brought challenges, too. Prices for materials have also shot up amid high demand, creating problems for contractors and those looking to build. Meanwhile, the Northwest Rural Water District has run out of capacity in rural Powell and Garland and can’t add any more water taps at the moment. And Forward Cody CEO James Klessens told county commissioners last week that the housing shortage is holding back efforts to bring new businesses into the area.

Meyer said the bull market could prove to be temporary, but “we might just keep going,” the assessor said, noting Wyoming’s low tax structure.

“... Hopefully it will level off next year, I hope,” he said, adding that, “Good news is, everybody’s place is worth more right now.”