Panther volleyball went into the western conference duals with a lot to prove, as they took on three of the top five programs in the state in Lovell over the weekend. 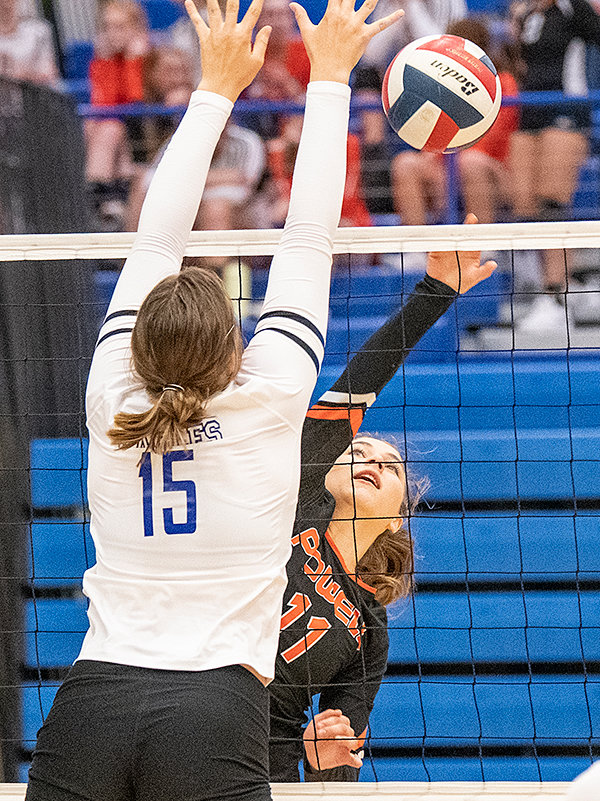 Sydney Spomer goes up for the spike Friday while being contested by a Lyman blocker during PHS’s first match of the weekend at the 3A western conference duals in Lovell.
Tribune photo by Carla Wensky 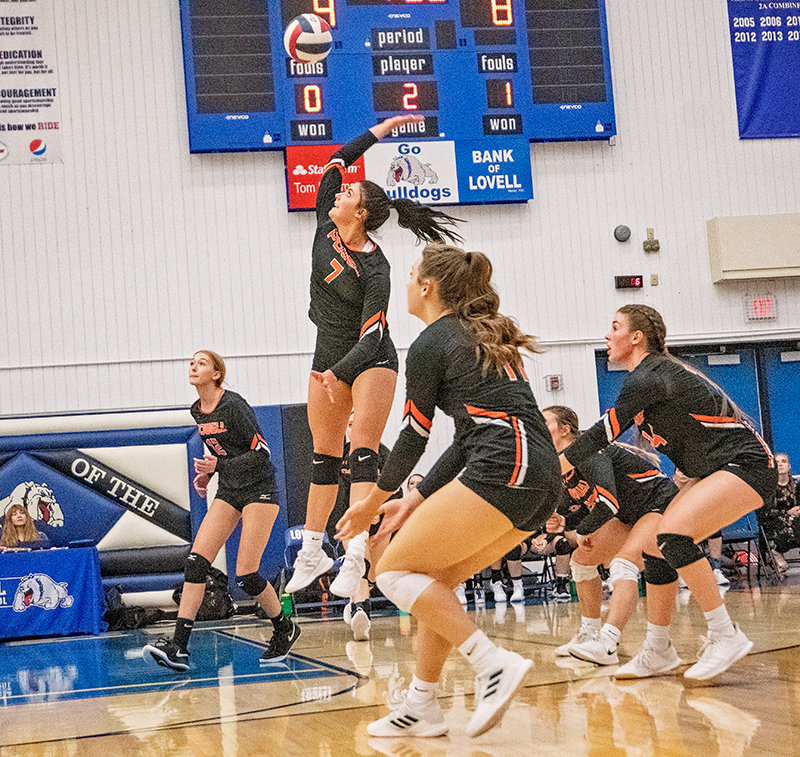 Meagan Good leaps up for a spike as the rest of the Panthers prepare for any potential blocks during their match against Lovell on Friday. The Panthers went 1-3 on the weekend at the 3A western conference duals.
Tribune photo by Carla Wensky
Previous Next
Posted Tuesday, October 12, 2021 8:10 am
By Seth Romsa

Panther volleyball went into the western conference duals with a lot to prove, as they took on three of the top five programs in the state in Lovell over the weekend.

The Powell High School squad went 1-3, but closed on a high note.

The weekend started off with a match against the second-ranked team in the state, the Lyman Eagles.

The Panthers started slow, and were never able to recover, dropping the first set 25-13.

Coming out with a stronger effort in the second set, the Panthers got a boost from sophomore outside hitter Kenzie Ratcliff, who used her experience as a libero to dig multiple big hits from the Eagles. PHS battled point-for-point with one of the top teams of the state.

Unfortunately for the Panthers, the Eagles had too much firepower as they pulled away at the end of the set to win 25-22 and lead two sets to none.

The third set started even through the first 16 points, but the Eagles again had too much firepower as they pulled away to win 25-17 and sweep 3-0.

The day did not get easier, as the Panther girls had a short amount of time to get ready for the top team in the state, the Mountain View Buffalos.

Slow starts in the first and second sets led to wide margins, as the Buffalos took the first two sets by a score of 25-14 and 25-13.

Coming into the third set the Panthers wanted to show the growth they had made to this point of the season, and they played the Buffalos, dropping the third set 27-25.

“We are continuing to grow and improve as a volleyball program,” coach Lesli Spencer said.

Heading into Saturday the Panthers came back refocused and played against another top five team in the Pinedale Wranglers.

The Panthers came out swinging, winning a tight first set 25-22, but dropped the second set by the same margin to even the match at 1-1.

PHS then came out and dominated the Wranglers in the third set moving ahead with a 2-1 set advantage after a 25-16 victory.

Unfortunately, the Panthers lost their focus after the third set, Spencer said, and proceeded to drop the next two sets 25-18 and 15-9 to lose the match 3-2.

“We are trying to push to finish. Finish sets, finish matches,” Spencer said. “The Pinedale match is a prime example of showing we are not there yet.”

Heading into the final match of the weekend the Panthers were looking to salvage a victory to not finish the weekend winless against southwest opponents when they came up against the Kemmerer Rangers.

The team came out with a refocused energy in their final match of the weekend, winning the first set 25-13.

Coming into the second set the team wanted to show consistency. They played a tight early set before a string of 10 serves from junior Gretel Opps helped the Panthers put away the set 25-12 and go up 2-0.

Finishing the weekend with a win was in sight, as sophomore Addy Thorington continued to improve her hitting. She threw different placements at the Rangers as the Panthers earned their sweep, beating Kemmerer 25-16 in the final set for the sweep.

“It was big for the girls to come away with a solid win,” Spencer said.

The Panthers will head into the second half of conference play against Worland on Friday, with freshmen games starting at noon, the junior varsity at 1 p.m. and the varsity at 2 p.m. The Panthers will be looking to continue their consistency with passing and avenge a loss earlier in the season to the Warriors.

“We have to work on keeping our focus and intensity throughout the whole match,” Spencer said.

The PHS team will then head down to Lander to play the Tigers at the same times on Saturday. The Tigers are coming off a weekend where they defeated Lyman and handed Mountain View its first loss to a 3A opponent this season.

The Panthers are hoping to build momentum off their victory against Kemmerer, and make a push to challenge Worland for the second seed in the west before the regional tournament in just over two weeks.