The Cody Stampede Rodeo — the city’s marquee event of the summer — has become the latest victim of the COVID-19 pandemic. 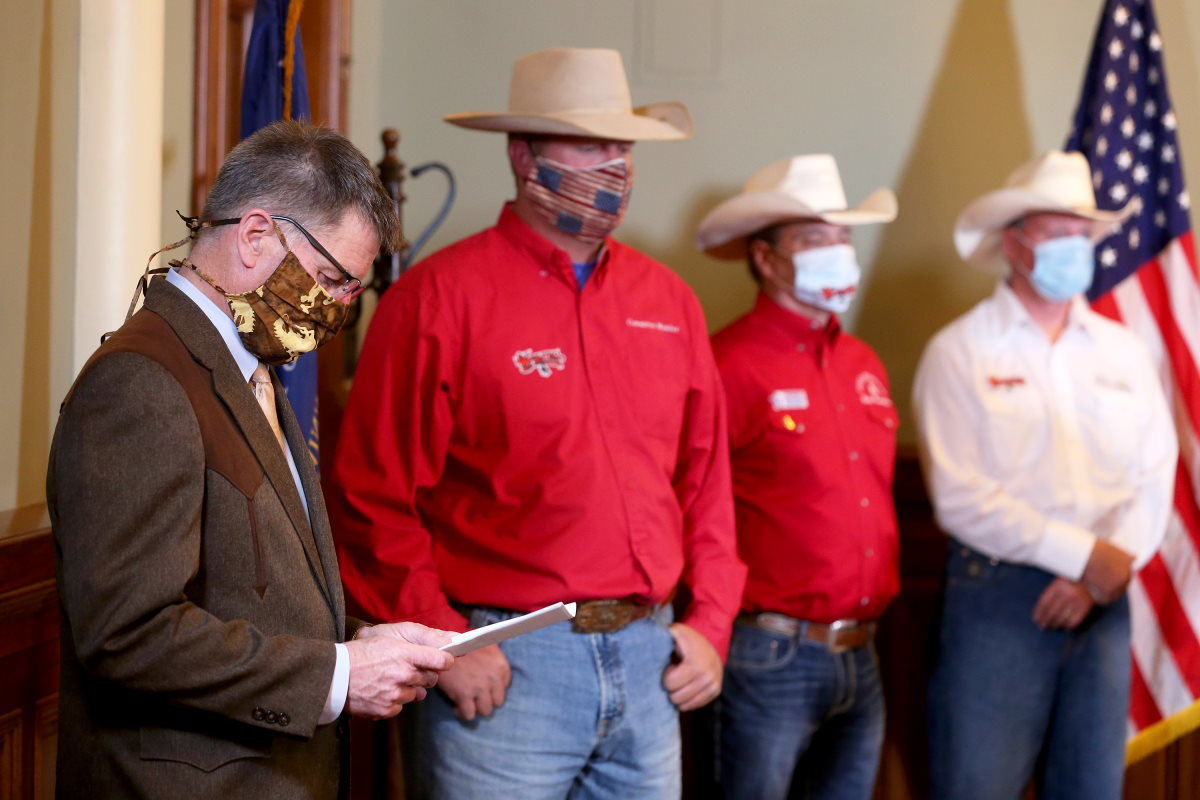 Wyoming Gov. Mark Gordon looks at his notes while standing in front of several rodeo leaders during a Wednesday press conference inside the Capitol in downtown Cheyenne. Joined by rodeo leaders from across the state, Gordon announced the cancellation of the six largest rodeos in Wyoming due to COVID-19 concerns.
Photo courtesy Michael Cummo/Wyoming Tribune Eagle
Posted Wednesday, May 27, 2020 8:16 pm
By CJ Baker

The Cody Stampede Rodeo — the city’s marquee event of the summer — has become the latest victim of the COVID-19 pandemic.

On Wednesday, Cody Stampede Board President Mike Darby announced that the annual rodeo event was being canceled.

“Along with our governor and his health advisers, we had to make the decision. We had no choice but to cancel our celebration of our Western lifestyle,” Darby said in a video released by the Wyoming Office of Tourism. In a brief phone interview, he said that “there’s no way that we could social distance crowds of that nature” at the Stampede rodeo and Xtreme Bulls competitions, which were set to run from June 30 through July 4.

Darby added that rodeo leaders do intend to move forward with the Cody Nite Rodeo — which typically runs nightly through Labor Day and draws smaller crowds. The Nite Rodeo is tentatively set to start on June 15, a couple weeks later than normal, and Darby said a variance to allow the nightly rodoes is being reviewed by health officials.

The cancellation of the larger Cody Stampede was announced by Wyoming Gov. Mark Gordon’s office on Wednesday, in conjunction with the cancellation of five other summer rodeos: Cheyenne Frontier Days and others in Thermopolis, Sheridan, Casper and Laramie.

Gordon said his office, Wyoming Department of Health officials, representatives from the six rodeos and others spent weeks “trying to find a way, any way, possible that we could hold our signature rodeos.”

However, “to proceed in these uncertain times would be touch and go at best and could quite possibly compromise these events’ capacity to put on an event next year,” Gordon said. “A bad experience could do enormous harm to Wyoming and the events’ reputations.”

Joined at the news conference by Darby and representatives from the five other events, Gordon said rodeo leaders held off on making a decision as long as they could.

“But in the end, going off half-cocked, in the collective minds of everyone up here, just wouldn’t be worth it,” Gordon said, adding, “This coronavirus thing sucks. There are just no two ways around it.”

Leading up to Wednesday afternoon’s news conference and announcement from the governor’s office, there were mixed messages about the fate of the 2020 Cody Stampede.

Around 1 p.m., Cody resident Deb Oakley Simpson posted a public plea for “HELP!!!” on Facebook, warning that Gordon was planning to call for the cancellation of the Cody Stampede and other rodeos.

“If you are against this and don’t want to see our local businesses suffer further please leave a polite but firm message at the Governor's office ASAP!” Simpson wrote.

Then, at 1:20 p.m., an administrator of the Cody Stampede Rodeo Facebook page posted a message indicating that plans for the event were moving forward.

“Rodeo Fans, please rest assured the Cody Stampede Board fully intends on producing another great Xtreme Bulls and Cody Stampede Rodeo and make sure [it’s] done in a safe and healthy manner,” the post said.

In a brief interview from Cheyenne, Darby said the afternoon Facebook post from the Cody Stampede “should not have been there; it was supposed to have been taken down. … That is inaccurate.”

The post was deleted hours later and Cody Stampede Rodeo page announced that more information, including about ticket refunds, would be available soon.

Simpson, meanwhile, said in a comment on Cody Area Classifieds that Darby “will have to answer to this community when he gets home from Cheyenne.”

Park County Commissioner and outfitter Lee Livingston, who is a member of the Cody Stampede Board, said that he had been in the mountains and out of the loop until Wednesday afternoon.

“When I went into the mountains, it was my understanding we were moving forward with hoping to have the Stampede, knowing full well that we were probably going to have to meet some health orders,” Livingston said. “Then I come out and this was kind of a big surprise to me.”

He said the board was prepared to put on the rodeo.

Beyond the potential limitations on the number of spectators at a given rodeo, the large rodeo leaders from around the state indicated they had concerns about other ancillary events being curbed.

“It became very clear to all of us that some of the components of each of our events logistically could not take place with respect to social distancing,” Cheyenne Frontier Days CEO Tom Hirsig said at Wednesday’s news conference. He specifically mentioned parades, carnivals, Indian villages, street dances, beer gardens and concerts as events that “are very successful because of the lack of social distancing.”

And going forward without those associated events could make the Wyoming rodeos “common” and set back future attendance, Hirsig indicated.

At the news conference, Gordon became visibly emotional while talking about the cancellations.

“No one hates this more than me,” he said.