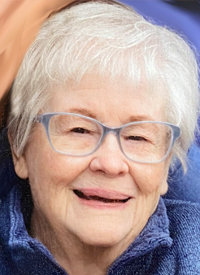 Charlotte “Char” M. Stevens went to be with her Lord on July 3, 2021, after a long battle with Alzheimer’s. Char was born in Mitchel, Indiana, on May 22, 1926, to Howard and Katie (Worthington) Miller. She was the youngest of six children.

Char was a dedicated nurse and received her nursing degree from Kent State University in Kent, Ohio. She joined the U.S. Navy in 1950, was granted a regular commission as an RN and held the rank of Lieutenant JG in the Navy Medical Corps.

During the Korean conflict, Char was stationed at the Oakland Naval Hospital outside San Francisco, California. It was there at an Officers’ Club party that she met the love of her life, Robert “Bob” Stevens. After a brief romance during which both received orders that would have sent them to different parts of the world, instead they married in December of 1954. Char resigned her commission in 1956. The next 66 years were full of love, devoting her time to raising her family and supporting her husband.

After many years in California, Char and Bob moved to Wapiti, Wyoming, in 1990, where they lived until 2011 when they moved to Cody.

Char is survived by her husband Robert “Bob” Stevens; a son, Robert “Rob” Stevens (Pam) of Powell; a daughter, Rebecca Stevens-Acker (Ray) of Powell and Wapiti; and many nieces and nephews.

She was preceded in death by her parents, her beloved sister, Alberta Miller, and all her other siblings.

As per her wishes, no services are planned, and the family requests that in lieu of flowers, a donation in her memory be made to either the Alzheimer’s Foundation or the Lupus Foundation. Condolences to Charlotte’s family can be sent on her memorial page at www.BallardFH.com.