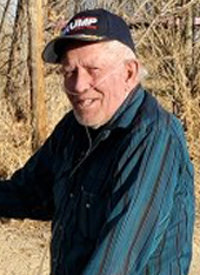 On Oct. 16, 1943, the world was changed for the better when Charles was born the son of Edward J. and Margurite (Ellinger) McKiernan in Powell. He was raised in Powell, where he was known for raising Cain and being crazy. He graduated from Powell High School in 1962 before honorably serving in the United States Navy, until 1964, during the Vietnam War.

When he moved to Riverton in 1967, Chuck found his forever love, Sharon Lilyquist. The couple married in December 1969.

He may have married, but he didn’t slow. He loved his stock cars, demos and anything to do with cars. He worked tirelessly, providing and proudly supporting his family. There wasn’t a state he hadn’t been to at least once. Chuck made a lasting, smiling, impression everywhere he went. From the Gas Hills to the north slope of Alaska, from Martha’s Vineyard to Florida, you couldn’t keep the man still. He always had a story and an amazingly contagious smile with that twinkle in his blue eyes. Chuck designed and built his and Sharon’s amazing log home in 1980, where their children and grandkids grew up. He built two more log homes for his adult kids. The man was a do-it-all, amazing soul! When asked how he was, he would say, “well, the undertaker hasn’t gotten me yet!” Chuck’s sense of humor was unstoppable.

He still had so many “irons in the fire” and projects yet to do but the good lord and Sharon were calling him home. He will be greatly missed by so many, but wow, what an amazing life Chuck had. I love you, Dad. See you later!

There aren’t enough pages in the world to tell you how wonderful, kind, funny and loving Chuck was. He would do anything for anyone. He could operate and repair anything he climbed on.

Online condolences may be made at TheDavisFuneralHome.com Arrangements are under the direction of Davis Funeral Home and Crematory.