Just after breakfast, on the first day of her post-retirement trip, former Cody High School instructor Amy Gerber had a visitor. Her new friend Susie stuck her head through an open window of the … 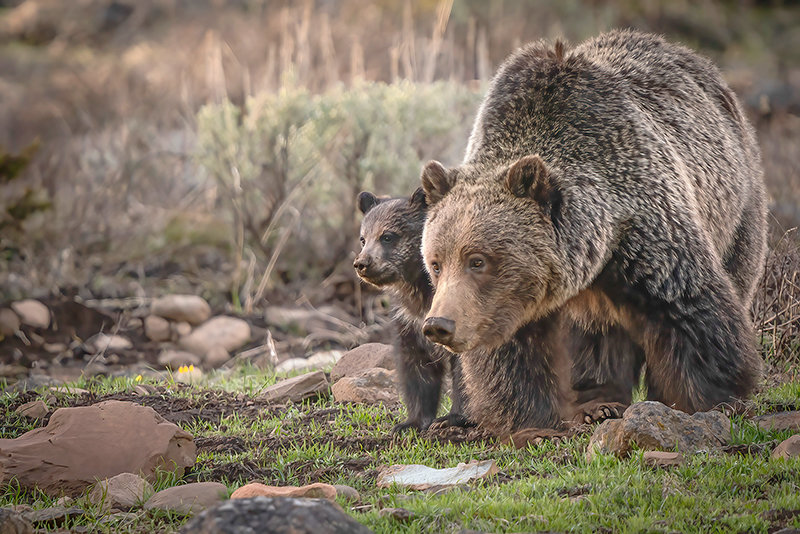 A female grizzly and her young cub near the East Entrance to Yellowstone National Park are seen in a photograph by Cody wildlife photographer Amy Gerber. The former teacher has taken on professional photography full-time and spends most days in her favorite wild places looking for the next ‘special’ situation.
Photo by Amy Gerber 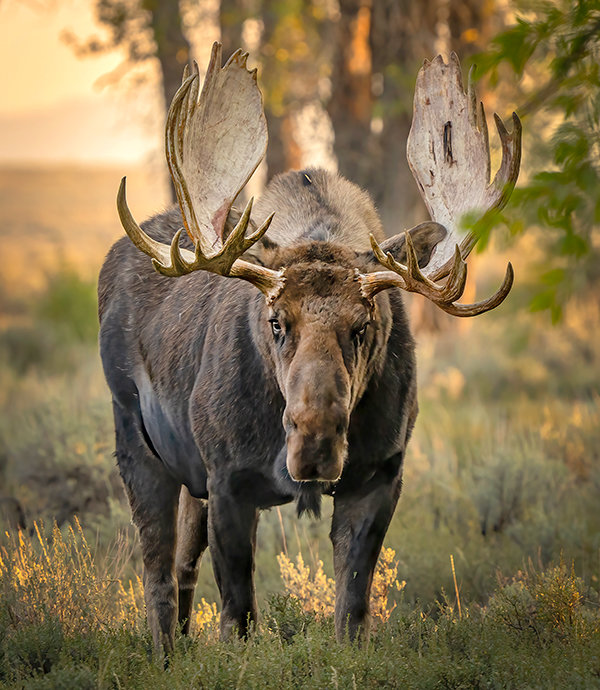 A massive bull moose foraging in Grand Teton National Park looks directly at Gerber’s camera during the golden light hour. Gerber photographs her subjects with long lenses at a safe distance and is patient, suffering frostbite while on a recent assignment.
Photo by Amy Gerber 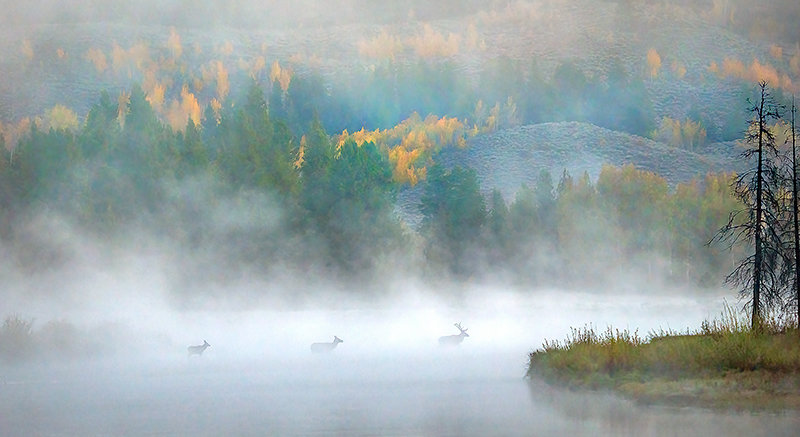 Elk make a morning river crossing on the Snake River in Grand Teton National Park. Photographer Amy Gerber has traveled the world with camera in hand, but spends most of her time taking photographs in northwest Wyoming.
Photo by Amy Gerber 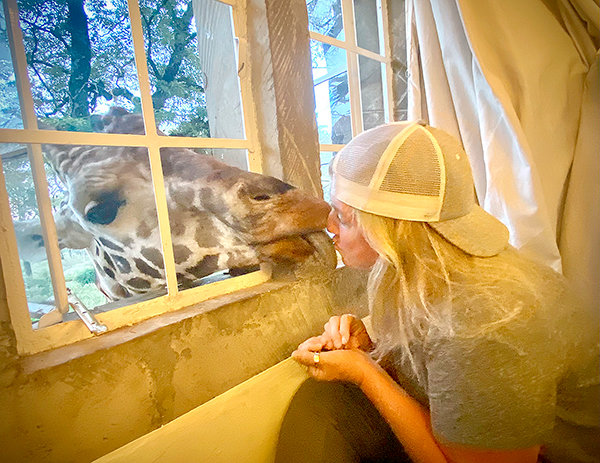 Amy Gerber gets a kiss from Ed, a 2-ton giraffe that poked its head through her bedroom window while staying at Giraffe Manor in Kenya.
Courtesy photo
Previous Next
Posted Thursday, March 17, 2022 8:25 am
By Mark Davis

Just after breakfast, on the first day of her post-retirement trip, former Cody High School instructor Amy Gerber had a visitor. Her new friend Susie stuck her head through an open window of the dining hall to see if Gerber had something left on her plate to share. With a 6-foot neck, and weighing in at 2,600 pounds, the female Rothschild giraffe made for a different meal — at least for the Park County resident.

But different is fairly common for Gerber. She prefers it that way.

She had managed to get a room in the internationally famous Giraffe Manor, an exclusive hotel set on 12 acres of private land within 140 acres of indigenous forest in Nairobi, Kenya. The hotel normally has a wait list of about 24 months, but because COVID-19 restrictions had just been lifted, there was room at the inn.

Often referred to as one of the most Instagrammed properties in the world, the manor normally costs about $1,240 per night for their cheapest double-occupancy room. That’s not cost-prohibitive for the Queen of England, who has been to the opulent resort, or any number of A-list stars, but it would have been a solid no for the Wyoming retiree. But again, thanks to lockdowns in the country, the rates were greatly reduced. Giraffe Manor had just re-opened and managers were eager for their first post-pandemic customers.

With a degree in zoology and a love for wildlife, Gerber was in heaven. She quickly fell in love with Ed, a 2-ton male giraffe that was able to stick his head through her second floor room window. Ed would lick her face with his 21-inch, gluey, sandpaper-like tongue — an interaction few have the opportunity to experience.

“It almost, like, burns your skin,” she said, sounding more like a student rather than a retired teacher in her excitement.

Her husband Larry, principal at Wapiti Valley School, wound up OK with the short-lived affair with Ed.

“When I saw that she was kissing a giraffe, it put my anxieties at ease,” he quipped.

“He has no worries,” Gerber promised.

After nearly three decades in Cody, Gerber’s new full-time job is wildlife photography. Gone are the thousands of students, but not the memories and relationships formed between mentor and thousands of proteges. Also gone is the attention from the public — much of it hard to take in the past few years for having the courage to stand up for all students — but not gone is the compassion she has for all students.

Ted, Larry and Amy’s son, came out eight years ago at the age of 14. While they worried about his safety, they were supportive of his decision and understood the difficulties of being gay in Wyoming. Ted faced ridicule, but braved it all. He is now looking forward to graduating from college with degrees in international studies with an emphasis in conflict resolution and Mandarin.

“I would not trade my son and the way he is for anything,” the proud mother said. “And I would never tolerate hate in my classroom.”

While teaching in Cody, Gerber hung a rainbow flag in her classroom.

“My flag stands for love and acceptance,” she said.

After several complaints, she was asked to move it to a less visible place and she complied.

In 2017, Amy organized the school’s Gay-Straight Alliance (GSA), a student-led and student-organized school club that aims to create a safe, welcoming, and accepting school environment for all youth, regardless of sexual orientation or gender identity.

It was a difficult time for Gerber as many in the community, including at least two members of the school board, showed disdain for her efforts to support the students.

“When she went through that entire process of getting the GSA going, there were people who see things their way, which is very different from the way we see it. They sent nasty messages and unkind things were said,” Larry said. “That did hurt her feelings.”

But, when one of her students committed suicide after graduation, Gerber refused to back down despite “having a target on my back,” she said.

‘Dogged in her pursuit’

Now, with her 32 years of teaching behind her, she makes daily trips to the Greater Yellowstone Ecosystem’s wildlife hotspots, often coming home with images that thrill her fans and fill her competitors with fits of jealousy. Some call her lucky, but the smart move is to never say it to her face.

“I make my own luck by making myself available,” she explained. “There are times when I do feel very lucky. And I don’t take a minute of it for granted.”

Her education, experience and persistence are the tools she draws on for her success. There are many trips that are a bust and she comes home tired and empty handed. Those who know Gerber are well aware of the hard work it takes to consistently bring home astonishingly beautiful and intimate photographs of wildlife and wild places.

“She is dogged in her pursuit of the shot,” said Kathy Lichtendahl of Clark, one of Wyoming’s most celebrated wildlife photographers. “I have nothing but respect for her ability to get the images she envisions. And [she is] amazing with her technical ability to get the most out of an image.”

Most folks don’t think about the time photographers spend in front of a computer editing through thousands of images and working the final projects. Great photos start with an in-depth knowledge of equipment and exposure. But you don’t just pop a digital card in and publish the first good view you find on the way.

Gerber is persistent to a fault, willing to go out when most are at home curled up by the fire with a good book and then to crawl in the back of her SUV for the night before rising well before the sun to be in place for the next day’s adventure. She rarely thinks about the dangers associated with the backcountry.

One morning she rolled out of her sleeping bag to find a grizzly bear on her vehicle, looking through the window. On another trip, she stayed the night in an undeveloped campground near Spread Creek in Teton County. The next morning, authorities found the body of Gabby Petito, whose disappearance last year sparked national headlines in a sadly bizarre story followed by millions. After many years working with children, Gerber was saddened. When police and federal agents were gone, she went back to the campground, collecting a few leaves and putting them in her journal.

“That’s how I kind of dealt with it,” she said. “It was just a little private moment.”

Recently Gerber was setting up to photograph river otters on the North Fork. Fresh snow was on the ground, temperatures were sub-zero and she had to hike to catch a glimpse of the comical critters, from a perch behind a drift near the river’s edge. She could see the otters upstream, but they took their time getting within range for photographs.

“I had frostbite on my fingertips,” she said. “I spend the time. And yes, there is luck involved, but I work hard for every shot.”

Gerber said knowing your equipment, understanding different species’ behavior and enduring long hours of waiting for what may be a few seconds of success are her secrets.

Gerber gets her share of accolades. Three of her photographs were recently recognized in the Wyoming Game and Fish Department’s Wyoming Wildlife Magazine photography contest. They showed a moose cow and her calf, a broad-tailed hummingbird and a landscape filled with fireweed highlighted by the setting sun.

She has had a long record of success in the contest, winning at least one award for the past dozen years. Yet she doesn’t enter other photo contests and doesn’t really care about being competitive. She does it for her soul.

“I never come home and feel like I just wasted my time,” Gerber said about spending time in the wild. “That’s my church. That’s how I recharge my batteries.”

She has thousands of online fans, including nearly 4,000 subscribers to her online gallery, Cub Creek Photography on Facebook. Her artwork is also featured at Open Range Images, in Cody, where, if you’re lucky, you can find her available to discuss her work.

But most days she is on the road working. Retirement has already paid off: “My portfolio is growing faster than ever,” she said while parked in Flaming Gorge, searching for a cell signal. “Instead of being a weekend warrior, now I’m out almost every single day. And more time in the field means more chances to see something special.”