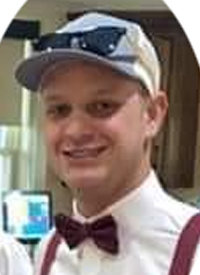 Brady Layne Herdt, son of Barry and Tawnya Herdt, passed away into the arms of the Lord on Jan. 8, 2022, in Gillette, Wyoming.

Brady was born on March 14, 1991, in Torrington Wyoming. He attended Powell public schools and graduated in 2009. Brady later attended Northwest College and University of Wyoming.

Brady was a very sensitive, caring and compassionate person. As a perfectionist he sought to do his best in everything he did. He was a hard worker and had an admirable work ethic in any job he held. His first job was working with his father as an apprentice electrician at the family-owned business. He traded his tool belt for a toolbox when he decided to pursue auto paint and body work. Brady built many lifelong relationships with his co-workers and bosses at the shops he worked at around Powell, Sheridan and Gillette.

Excelling in his mechanical abilities he could fix any vehicle or race car that was not performing at its best. His passion for going fast is what drove him to racing. He raced A Mod and B Mod dirt track cars and loved the thrill of adrenaline only a race could provide, win or lose. Brady quickly made a name for himself in the racing community by always lending a helping hand and putting in the extra hours.

Brady’s big brother Bryson was his idol. He always tried to be just like him, continuing Bryson’s legacy by using his jersey number 84 on his race cars. They spent many hours together snowboarding, wake boarding and many other activities. Brady’s family was always a top priority for him. He really enjoyed spending time with his father and grandfather by working on various projects together.

Brady touched the lives of many throughout all stages of his life. He has left a lasting impression on all of our hearts and will be greatly missed. Brady was preceded in death by his grandparents Ted and Loretta Herdt, Albert Wagner Jr., his brother Bryson and his uncles Doug and Randy Herdt. Brady is survived by his parents Barry and Tawnya Herdt, his grandparents Tom and Sandra Eller, his girlfriend Bailey and numerous aunts, uncles, cousins, and friends.

A viewing will be held Saturday, Jan. 15, from 2-5 p.m. for family and close friends, at Gillette Memorial Chapel, 210 West Fifth Street, in Gillette, Wyoming. A celebration of life will be held at a later date for Brady, driver of car 84H.

A memorial is being set up in Brady’s honor at the Gillette Thunder Speedway. Arrangements are being handled by Walker Funeral Home. In lieu of flowers, donations and condolences may be sent to the family at 1540 Bowman Ave, Sheridan, WY 82801.