Is Powell ready for gaga ball?

Drew Valdez thinks the casual, dodgeball-like sport will offer a fun activity for everyone. 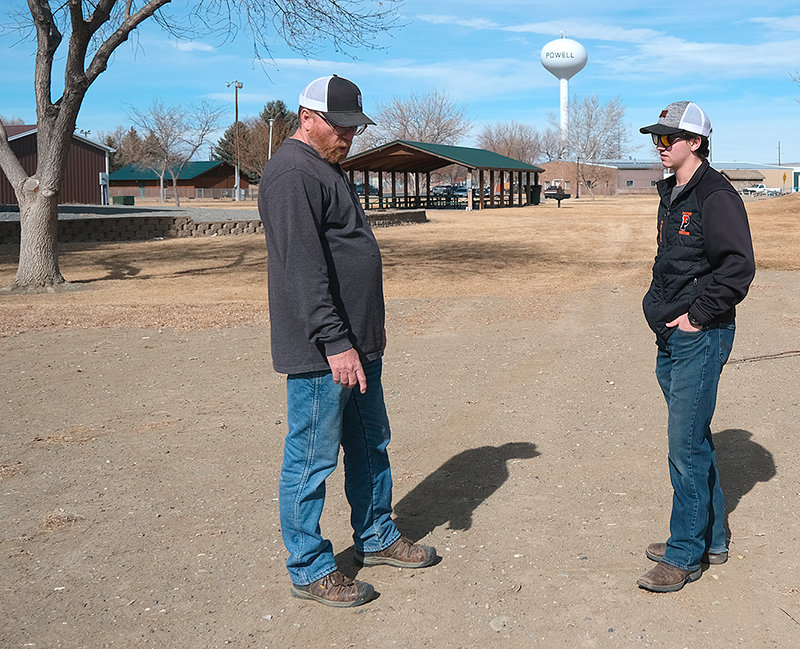 Drew Valdez meets with City of Powell Parks Department Superintendent Tim Miller at the site of a planned gaga ball pit at Homesteader Park. The ring for the dodgeball-like sport is set to be installed in the area that used to host the Froggy Pond.
Tribune photo by Kevin Killough
Posted Thursday, March 10, 2022 8:20 am
By Kevin Killough

Is Powell ready for gaga ball?

Drew Valdez thinks the casual, dodgeball-like sport will offer a fun activity for everyone.

The Boy Scout approached the Powell City Council last month with a proposal to build a gaga ball pit at Homesteader Park. Valdez is pursuing the Eagle Scout rank, which requires a service project in line with the Boy Scouts of America’s values of service to others.

Part of the project’s requirements is that Valdez conduct fundraising efforts, so the construction will be paid for with private donations.

The rules of the game vary depending on who you ask, but basically two or more people enter a ring with six to eight sides, which are a couple feet high. Players slap a ball toward other players and attempt to hit their legs below the knee. Once hit, the player exits the ring.

Valdez said he got the idea to bring the game to Powell when he played it at Many Point Scout Camp in Minnesota last summer.

“We had such a blast playing it,” he said, and it’s an all-ages game anyone can play.

Valdez told the council he’s been working with City Park Superintendent Tim Miller on exactly where at Homesteader Park the pit could go. The current plan is to place it on the east side of the Powell Aquatic Center next to the playground, on a patch of ground where the frog pond used to be.

Councilor Lesli Spencer asked Valdez how people would know how to play the game, and Valdez said the rules would be posted, adding that people can adjust the rules for their own style of play.

City Administrator Zack Thorington said people could get injured hopping over the walls and requested that Valdez alter his plans to include a gate for people to walk through.

“It would be better for people than jumping over fences and getting hurt,” Thorington advised.

Valdez said he’d incorporate a gate into the plans.

Spencer asked about the level of maintenance the pit would require, and Thorington said it would be minimal. The construction is all wood, which would require some staining, as well as some weeding.

Councilor Geoff Hovivian asked if it was possible to use vinyl fencing, but Valdez said wood would work better for the physics of the ball in play and would be less likely to crack.

Valdez’s proposal lists the estimated costs at just over $600 for the materials.

The council approved Valdez’s request. He said he hopes to have it constructed and open by this summer. Valdez said he can’t be sure it will catch on, but he’s glad the city is giving it a chance.

“All I can do is hope that others find as much joy in it as we scouts did,” Valdez said.

After the project is complete, Valdez will need to fill out some paperwork and go through a review board before achieving the rank of Eagle Scout.