Ethan Bartholomew almost passed on playing tennis when he reached high school. Four years later, however, he’s capped a successful career for the Panther tennis team, earning his second All … 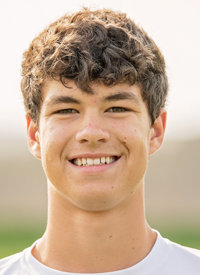 Bartholomew’s PHS journey began when he was invited to watch his friend Aiden Chandler’s middle school matches. Bartholomew was then convinced by coach Joe Asay to come out to an open hit night just before his freshman year.

“Compared to a lot of the other first singles players around the state, I have not been playing tennis very long,” Bartholomew said.

He earned his first All State honor back in 2019 as part of the No. 2 doubles team with Grant Dillivan, when they finished runners up at the state tournament.

Moving up in recent years to No. 1 singles has helped Bartholomew validate his experience over the years and have it all come full circle with him earning All State again this year.

“The opportunity to play first singles has been amazing,” Bartholomew said. “It felt great to be named to the All State team, for I knew it was a direct result of the hard work and countless hours of practice that I have put into tennis for the last four years.”

For his senior year overall, Bartholomew felt it was a success as he finished with a 10-9 record. He felt he excelled against southern conference players and struggled against north opponents, but he was able to earn the No. 4 seed out of the regional tournament heading into state.

At the state tournament he was able to win his first match, but lost his second and was dropped down to consolation. He earned his way back to the consolation semifinals but was unable to continue due to injury.

“Sadly, I had to forfeit my last high school match in the consolation semifinal,” Bartholomew said. “I was really frustrated that my season ended so abruptly.”

With his senior year of high school tennis over, Bartholomew said he plans to travel around and play several United States Tennis Association (USTA) tournaments in Montana and Wyoming. After graduating high school in the spring, he plans to continue playing tennis at the club level in college.

Other seniors from the team this year included Kaili Wisniewski, Chandler, Kolt Flores and Logan Brown.

Coach Asay wanted to particularly recognize senior Wesley Hoffman, who came out all four years, worked hard and led by example for the team.