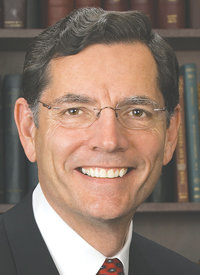 On Tuesday, Barrasso asked Secretary of the Interior Deb Haaland to keep national parks and public lands accessible to the public in the event of a shutdown.

“The safety, security, and public access to America’s national parks should be a priority regardless of the political environment,” Barrasso wrote in a letter. He said closing the parks “would have devastating impacts.”

Along with battling over a measure that would raise the federal debt limit — something Treasury officials say must be done by mid-October to avert a default — as of Wednesday afternoon, Senate Republicans and Democrats had yet to approve a budget for the new fiscal year that begins Friday. They were expected to reach a deal, but if they don’t pass some kind of funding measure, the majority of federal offices will
temporarily close and most workers will be furloughed.

In his letter to Haaland, Barrasso said a shutdown of the National Park System would impact tourists planning a trip to a national park, gateway communities that rely on park-related tourism and National Park Service employees who rely on a regular paycheck. (In the past, federal workers have been forced to go without pay until Congress restores funding.)

A shutdown in October 2013 led to Yellowstone and Grand Teton national parks and Bighorn Canyon National Recreation Area being shuttered for 16 days. The number of visits to Yellowstone that month sank 73% from the prior year, with officials logging 129,500 fewer visits. The closures of the public properties also drew public backlash.

“There was enormous political pressure to reopen the parks, culminating in a Republican House joint hearing, where I, as the NPS director, was grilled for five hours over the decision to close the parks during the shutdown,” Jonathan Jarvis recalled in a 2019 op-ed for The Guardian newspaper. “Though unintended, the closure of the national parks became a rallying cry for the public to force Congress to finally pass appropriation legislation and reopen the federal government.”

A three-day shutdown in January 2018 and a 35-day shutdown between December 2018 and January 2019 had more limited impacts on the public’s access to local National Park Service properties. That’s in part because they occurred during the slower winter season and in part because the Trump administration chose to leave parks open with next-to-no staff or public services. In his 2019 op-ed, written amid the shutdown, former NPS director Jarvis criticized the decision to keep the parks open, saying it was “equivalent to leaving the Smithsonian museums open without any staff to protect the priceless artifacts.”

However, Sen. Barrasso endorsed the Trump administration’s approach in his Tuesday letter. He asked Secretary Haaland to tap into user fees to provide continued visitor services and law enforcement in the national parks if Congress fails to provide funding, saying that’s what was done during the 2018-2019 closure.

“In previous years, it has been demonstrated that these funds can be successfully utilized to keep public lands open during a shutdown,” Barrasso wrote. He said the federal government can both conserve the national parks and provide public access “through careful planning and coordination.”

Barrasso asked Haaland for an accounting of the funds currently available under the Federal Lands Recreation Enhancement Act and the contingency plans the department has developed for each of its bureaus.

Reached Wednesday, a spokeswoman for the Department of the Interior declined to comment on Barrasso’s letter and the concept of keeping national parks open amid a shutdown.