Area fishing is hot, but not in a good way

By 9 a.m. Tuesday, it was already steamy. The thermostat was bulging, with triple digits expected by early afternoon. As Larry Timchak loaded his inflatable boat with equipment, Max, his giant but …

Area fishing is hot, but not in a good way 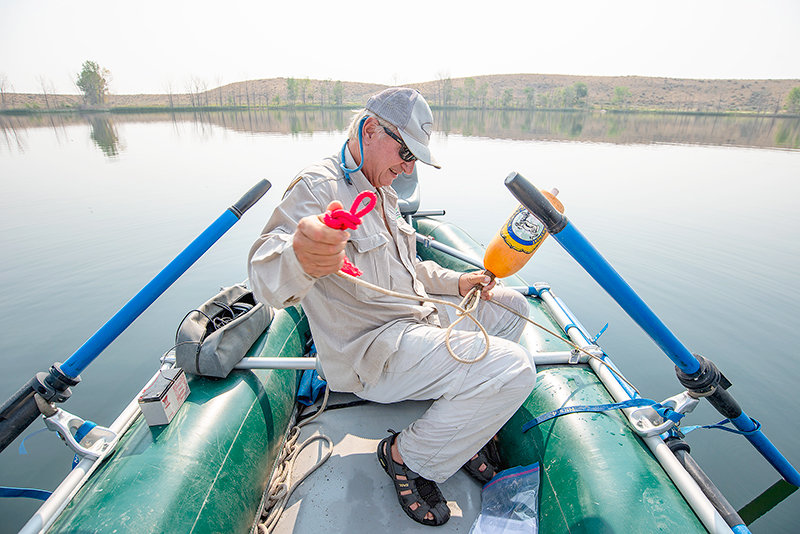 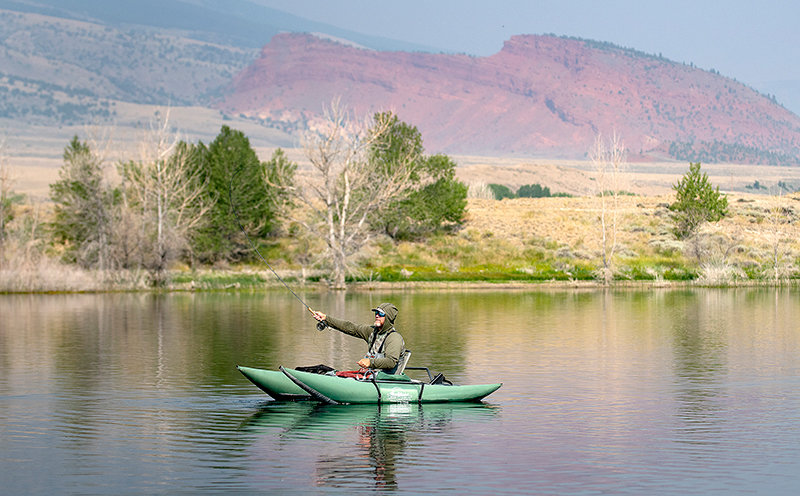 Kevin Travis, of Arizona, fishes for trophy trout in East Newton Lake Tuesday morning. He travels to Park County each year to enjoy the great fishing in the Cody region.
Tribune photo by Mark Davis
Previous Next
Posted Thursday, July 29, 2021 8:20 am
By Mark Davis

By 9 a.m. Tuesday, it was already steamy. The thermostat was bulging, with triple digits expected by early afternoon. As Larry Timchak loaded his inflatable boat with equipment, Max, his giant but gentle octogenarian dog, was seeking shade.

Timchak was planning to wet his line in one of Cody’s top trophy trout fisheries, East Newton Lake. The lake and its twin, West Newton, have received a lot of attention in the past couple years due to high water.

Now drought has hit the West and, combined with record heat, many of the area’s favorite fisheries are once again threatened.

Timchak, chairman of the Newton Lakes Working Group and vice president of the East Yellowstone Chapter of Trout Unlimited, was met Tuesday by Wyoming Game and Fish Department fisheries biologists Joe Skorupski and Jason Burckhardt to deploy temperature loggers near the center of the scenic lake. Tracking escalating water temperatures will help Game and Fish decide on temporary regulation adjustments, if needed.

“We want to hold on to the gains we’ve made in recent years,” Timchak said.

Trout can’t survive in water temperatures above 75 degrees and anything over 70 degrees can drastically change their metabolism. Fighting at the end of a line can stress trout in hot water. If the plan is to take fish for dinner, it’s not a large concern, but in catch-and-release situations — like at East Newton, Luce Reservoir or in one of the many wild rivers and streams in the area — the fish may not survive being caught, and releasing them may be futile.

The lake isn’t the only fishery jeopardized by weather trending hot earlier in the year and the worsening drought. Despite rain in the current forecast, drought continues to act on multiple timescales — ranging from a few weeks (mostly agricultural impacts) to two decades (ecological and hydrological effects), according to the U.S. Department of Agriculture.

Dozens of wildfires continue to burn through hundreds of thousands of acres of timber, brush, and grass in the West, aided by hot, dry conditions, dry soils, and ample fuels, the agency reported on July 20. Wildfire smoke continues to degrade air quality in many areas of the country, well beyond western states. In the Big Horn Basin, the air quality has been noticeably clogged with thick smoke.

At least half of the rangeland and pastures have been rated very poor to poor in Wyoming and neighboring states.

Fishing in those waters will be prohibited from 2 p.m. to sunrise the following day and remains in effect until further notice. Water temperatures have exceeded 68 degrees Fahrenheit in recent days, and flows on many rivers are approaching historic lows.

“This closure will protect the park’s native and wild trout fisheries,” the National Park Service said.

Yellowstone Lake and other lakes will remain open to fishing from sunrise to sunset.

“Please fish during the coolest times of day and land fish quickly — do not play hooked trout to exhaustion,” said the Park Service release. “Gently handle fish in the water as much as possible and let them recover before release. Your cooperation will protect the park’s fisheries and may preclude the need to prohibit fishing at all times of the day on some rivers and streams if conditions worsen.”

Elsewhere in Wyoming, the Game and Fish Department has been reporting fish die-offs due to the current weather conditions. Some of the pools of top fisheries in the Cody Region are shrinking fast, including Upper and Lower Sunshine near Meeteetse, which were built as irrigation retention ponds.

“Low water flows combined with high air temperatures cause water temperatures to get high enough to be lethal to trout,” said Alan Osterland, fish division chief. “Warm water also holds less oxygen which can stress not only trout, but also all fish.”

The department has the power to limit fishing or close fisheries if needed.

“There are certainly concerns about catch and release angling when water temperatures are over 70 degrees,” said Jason Burckhardt, Cody Region fisheries biologist, adding, “There are a lot of tools in our toolbox that we can use to manipulate [fish] populations. Fishing closures are generally one of the most draconian, but if necessary, they can be enacted.”

However, he said anglers can help keep restrictions from being enacted by following hot weather etiquette rules the Game and Fish published Tuesday.

Burckhardt suggests “minimizing the amount of time that you play the fish and trying to keep them in the water as much as possible — as well as releasing those fish as quickly as possible.”

While anglers can help alleviate much of the stress on the fisheries during temporary weather patterns, if hot, dry weather persists long-term, some of the region’s trout fisheries might need to be rethought, Burckhardt said. “East Newton is well known as a trophy trout fishery and that’s how we intend to manage it,” he said. “But if we continue to see issues like this, we might have to consider changing how we manage it, whether it’s different species or whatnot. Not just in this water, but elsewhere.”

Using advice from Burckhardt and Skorupski, Timchak rowed to the middle of the lake, looking for a spot with more than 25 feet of water. In his possession were four temperature loggers, a 30-foot length of rope, a buoy and an anchor — donated to the working group by the U.S. Geological Survey and the Game and Fish.

He’ll monitor water temperatures, sharing the information with the state fisheries biologists. The hope is to save as many fish as possible in the small lake.

“There is increased mortality even despite proper handling as I understand it,” Timchak said. “In other words, even anglers who quickly get [the fish] back in the water and do everything right still see more fish dying because of the stress on their systems.”

Temperatures will be measured at four depths. There is already surface water that is above 70 degrees, Burckhardt said, but fish currently have the option of moving to colder water at the bottom of the lake.

There are many anglers worried about the trend’s effect on the area’s top fishery: the Shoshone River from Yellowstone National Park to the Willwood Dam. By late afternoon and into the evening, temperatures can get into the upper 60s and close to 70 degrees above Buffalo Bill Reservoir. Game and Fish suggests anglers avoid fishing afternoon and early evening hours to protect the population.

Cold water being released from the bottom of Buffalo Bill Reservoir is helping keep the river’s water at safe temperatures for fish below the dam, Burckhardt said.

At Newton Lakes, Timchak credits the Game and Fish for increased cooperation.

“Game and Fish has been at the table to hear our concerns and respond, which is really refreshing,” he said.

“We certainly appreciate having people that are really interested in conserving our resources,” he said. “It’s great to have folks that are passionate about making sure that we have cold water fisheries well into the future.”

• Fish early in the morning while water temperature is cooler.

• As water temperature increases, using the proper techniques to catch and release a fish becomes increasingly important to help ensure the fish has a chance to survive.

• Play and land fish as rapidly as possible to reduce exhaustion stress.

• Keep the fish in the water as much as possible.

• Do not squeeze the fish or place fingers in the gills.

• Remove the hook gently. If hooked deeply, cut the leader.

• Flies and lures are recommended whenever many fish are being caught and released.

• If a fish is exhausted and cannot hold itself upright — and if regulations allow — consider having it for supper because the fish has a poor chance of surviving.