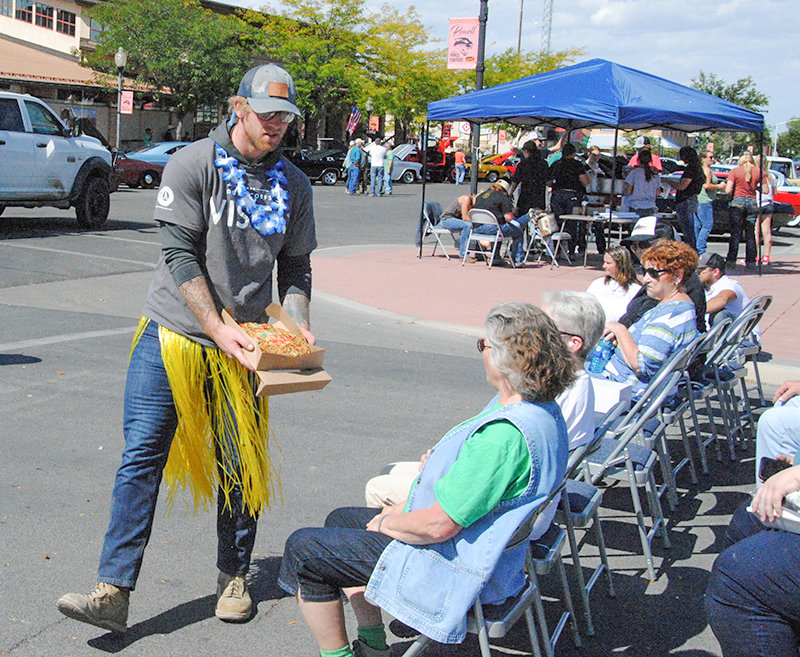 Pumpkin pie, anyone? VISTA volunteer Nate Martin shows a pie (and his grass skirt) to the audience of buyers at the Ruby Hopkin Commemorative Pie Sale at Saturday’s Homesteader Days.
Tribune photo by Dave Bonner
Posted Tuesday, September 14, 2021 8:15 am
By Dave Bonner

Identifying herself as a traveling nurse on her last day in Powell, Suzanne Ackerman approached Homesteader Museum Executive Director Brandi Wright during the museum’s Homesteader Days pie sale Saturday afternoon and asked where the proceeds from the sale go.

“I told her there is not a set usage for the money, but generally it’s used for the extras that support the museum,” Wright said. ”One year we bought a security system. Or we may use the pie sale money to purchase supplies to build the frames for an exhibition we may be hosting, kind of a behind-the-scenes expense.”

“I can assure you every single penny goes to the museum,” Wright summed up.

“Then I am going to buy a pie,” nurse Ackerman declared. “I want to thank the community that has supported me.”

And buy a pie she did.

Leaving Powell Sunday at the end her engagement as a traveling nurse at Powell Valley Healthcare, Ackerman took with her a peach-raspberry pie and the distinction of delivering the highest bid ever at the Homesteader Museum home-baked pie sale — a whopping $450. The pie was baked by Sherri Gifford of Powell.

The record-setting pie purchase came near the end of the afternoon pie auction. A total of 32 pies were sold, contributing $2,775 in pie sale revenues to the museum. The 2021 sale total was only $70 short of the record pie sale fetch of $2,845.

Ackerman is from Newcastle.