After four decades of service to Park County, Rose retires

When the Park County government expanded its Cody jail in the early 1980s, Aaron Rose was among those who helped build the addition. The job would wind up indirectly serving as a starting point for …

After four decades of service to Park County, Rose retires 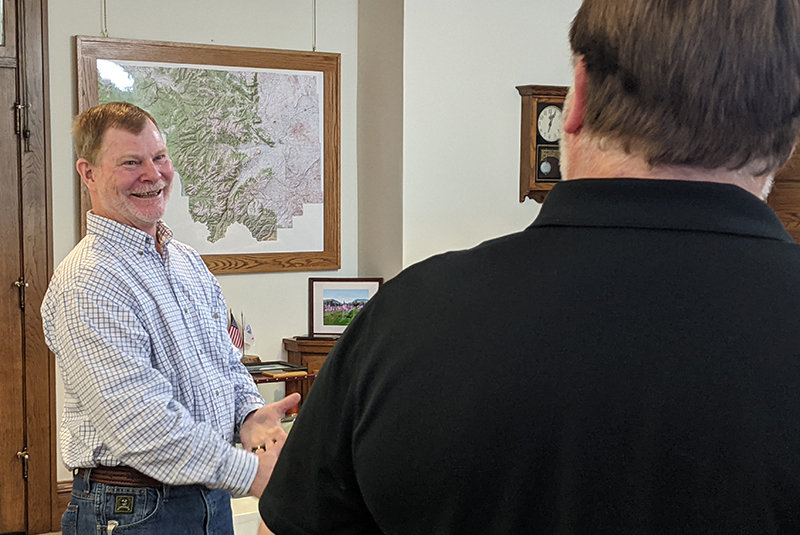 Longtime Park County employee Aaron Rose grins while being cheered by Park County Engineer Brian Edwards at an Aug. 3 retirement ceremony in the commissioners’ meeting room. ‘During his time with the county, Aaron has been willing to do anything and everything all with a big smile on his face,’ Edwards said.
Tribune photo by CJ Baker
Posted Thursday, August 12, 2021 8:15 am
By CJ Baker

When the Park County government expanded its Cody jail in the early 1980s, Aaron Rose was among those who helped build the addition. The job would wind up indirectly serving as a starting point for four decades of service to the county.

“When they boosted the jail staff all the way up to eight, I was fortunate enough to get hired by [then-Park County Sheriff] Bill Brewer and start this career,” Rose recalled.

“The farthest thing from my mind at that time was that other benefit called retirement. All of a sudden that’s here,” Rose said last week.

He served as a sheriff’s deputy for 30 years, eventually moving from the detention center to patrol and then retiring in 2015. By the time Rose hung up his badge, Park County had built a new jail, manned by some 30 deputies and support staff.

But that wasn’t the end of Rose’s public service: Immediately after retiring from the sheriff’s office, Rose took a job as the operations coordinator for the Park County Public Works Department.

It was only last month, after another seven years of service, that Rose retired from the county for good.

“Park County has been very good to me,” he said, expressing his appreciation to commissioners. “My career had its moments, but overall, it was good [with] numerous good people.”

The commissioners and Rose’s most recent supervisor, County Engineer Brian Edwards, expressed their appreciation for his long-running service.

The engineer called Rose a class act who’s always willing to help anybody.

“Our office deals with a lot of sometimes happy customers, sometimes not, but he’s always even in his personality,” Edwards said of Rose. “He always deals with it with professionalism — and the rest of us, we could learn a lot of lessons from Aaron.”

Rose has deep roots in Park County. His family arrived in Cody in 1904 and his great-grandfather, J. Y. Smith, served as the superintendent for the construction of the original Park County Courthouse.

At Rose’s retirement ceremony, commissioners presented him with a historic photo of the LU Ranch outside Meeteetse, where he spent his teen years. Rose gave commissioners a photo of his own: An old portrait of the J. Y. Smith family to display in the courthouse.

“I thought that this would be the appropriate time to give a little bit back,” Rose said.

Edwards said Rose will be greatly missed at the county, “but we are excited for him as he starts this new chapter.”