A tasty little treat lives among you

There’s something wonderful hiding in plain sight, right under your noses here in Powell.

This “something” is a commodity which Nebraskans in York, Kearney, Lincoln and who knows …

Shots from a Loose Cannon

A tasty little treat lives among you 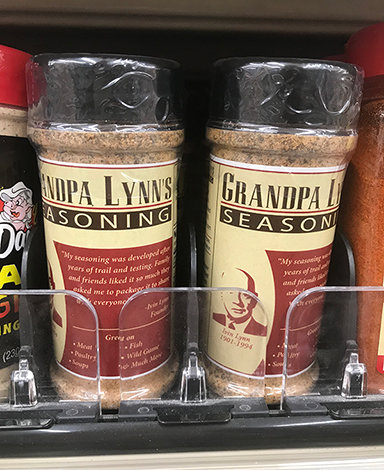 Grandpa Lynn’s Seasoning, made in Powell, is a hot commodity in Nebraska.
Tribune photo by Steve Moseley 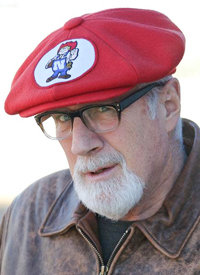 There’s something wonderful hiding in plain sight, right under your noses here in Powell.

This “something” is a commodity which Nebraskans in York, Kearney, Lincoln and who knows where else hold in highest regard.

Good Wife Norma and I, as former residents of Powell, have been hooked on Grandpa Lynn’s concoction for years. To the accusation that she and I are personally and solely to blame for infecting our kids, their kids and several of my fishing buddies in and around York, we unapologetically plead guilty as charged.

Our son and daughter who live with their spouses and kids in Kearney and Lincoln have for many years demanded that Santa deposit a jar of Grandpa Lynn’s into their stockings each Christmas. If it’s not there, we hear about it. Trouble is a jar doesn’t hold them for a year anymore, thus a resupply in the summer grilling season is now required.

This is why the product is ordered online in case lots by disciples in York.

Three years in a row I tossed in a jar when my fishing group went fly-in walleye fishing in northern Ontario; three times someone other than I made the return flight with those bottles tucked away in their gear.

We feast on heavily breaded fillets every evening in our various remote walleye camps, but man, after a week of such culinarily ponderous excess you drag yourself to the outhouse where, depending on how your metabolism processes great gobs of fried dough, either: 1) nothing at all happens or 2) way too much happens.

After years of this, I began to tote a bottle of Grandpa Lynn’s with me on the float plane. As the “real” meal was gurgling and gasping in the fryer, my habit became to fire up the adjacent gas grill, soak a separate pile of fillets in lemon juice, pop them on foil a handful at a time, sprinkle them liberally with Grandpa Lynn’s, cook till flaky and no longer translucent, then walk around camp, serving them from a platter.

The first year I cooked a few fillets. The second more than twice as many. The third year the boys ate more grilled walleye than deep-fat fried.

Credit for this goes entirely to the wonders of Grandpa Lynn’s.

Let your steaks have it with both barrels. Chicken? Absolutely.

Burgers are perhaps best of all. My grandkids, indeed everyone to whom I serve Grandpa Lynn’s burgers, horks them down “mit gusto” as our former friends in Germany would say.

Avoid the cheap stuff and the ultra-lean both. Dump your burger onto a plate and mash it out flat with your hands until it resembles a pizza. Shake a bunch of Grandpa Lynn’s on the top of your raw meat pie and press it in a little bit. Now flip it over and do the same for the other side. Next is to fold and mash and squeeze the stuff between your fingers (pansies have my permission to use rubber gloves) to mix the seasoning as thoroughly as possible throughout. Make little balls of meat in the size you prefer for your burgers and mash them out flat either by hand or, like me, with a cheap burger press to your preferred thickness.

DO NOT press the poor things with your turner while they’re cooking like you’ve always done. Don’t lie to me, almost everybody makes this awful mistake and mashes nearly all those wonderful natural, bursting-with-flavor juices onto the burner.

All that remains is to take $5 to Blair’s and check out the spices (hint: they’re in aisle 7).

If you trust me enough to “do as I say” and also “do as I do” you will not be sorry. Promise.

Remember, you heard it here first.

Shots from a Loose Cannon