Sara Wood’s alfalfa field up on Heart Mountain is a noisy jungle, and she’s pretty happy about that. Wood didn’t apply any pesticides. For every harmful insect, she said, there are … 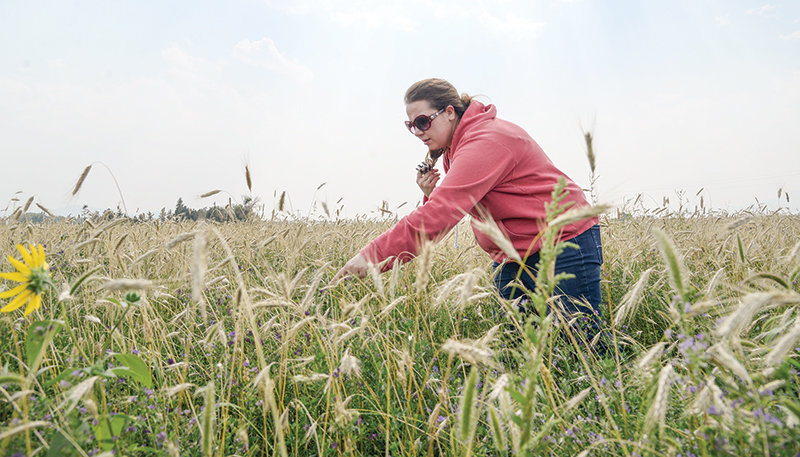 Sara Wood looks down into the mixture of grasses of her hayfield at the ladybugs crawling up the stems. Wood is trying regenerative farming, which she described as creating an ecosystem.
Tribune photo by Kevin Killough 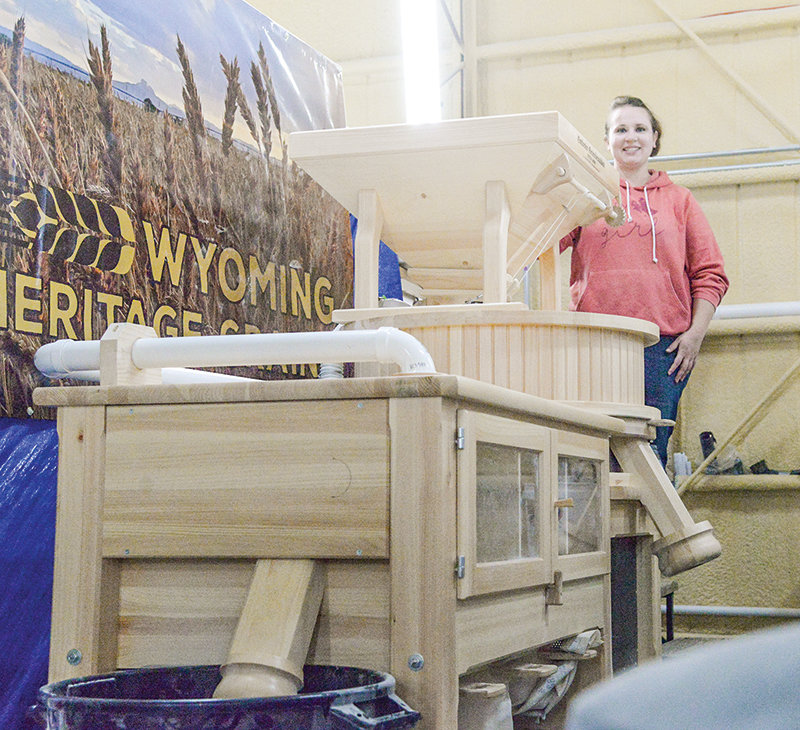 Wood stands with Millie the Mill. Wood believes her handcrafted stone mill maintains more nutrition in the flour she produces from a number of ancient grains.
Tribune photo by Kevin Killough 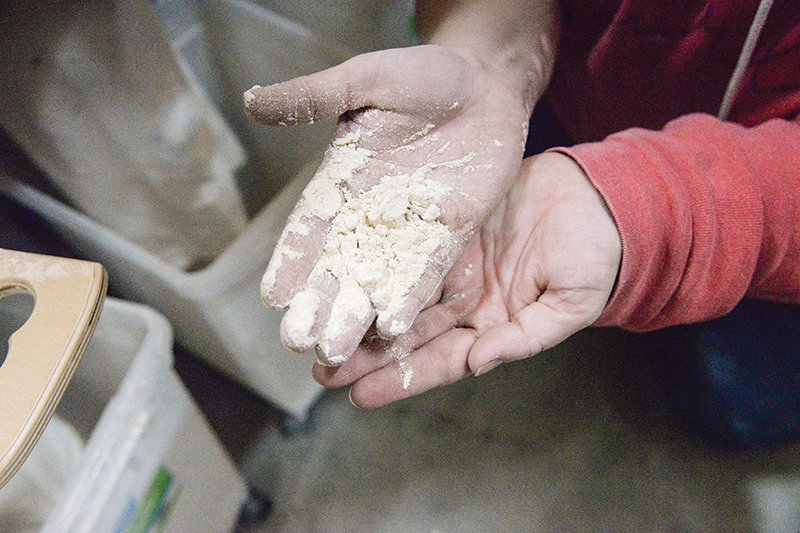 Besides the flour she holds in her hands, Wood sells mixes and baked goods.
Tribune photo by Kevin Killough 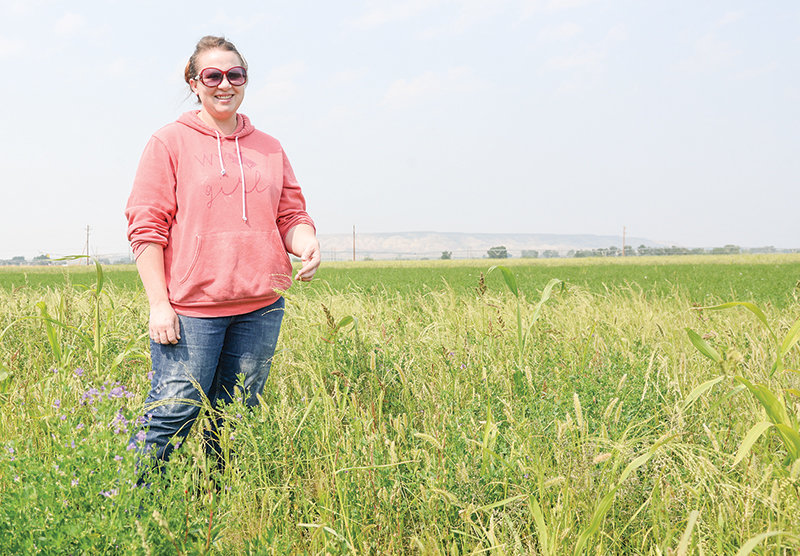 Sara Wood stands in her regenerative hayfield on Heart Mountain. She uses a variety of grasses with no pesticides or fertilizers. She calls it symbiotic chaos, but she believes it will produce a much richer soil with fewer inputs.
Tribune photo by Kevin Killough 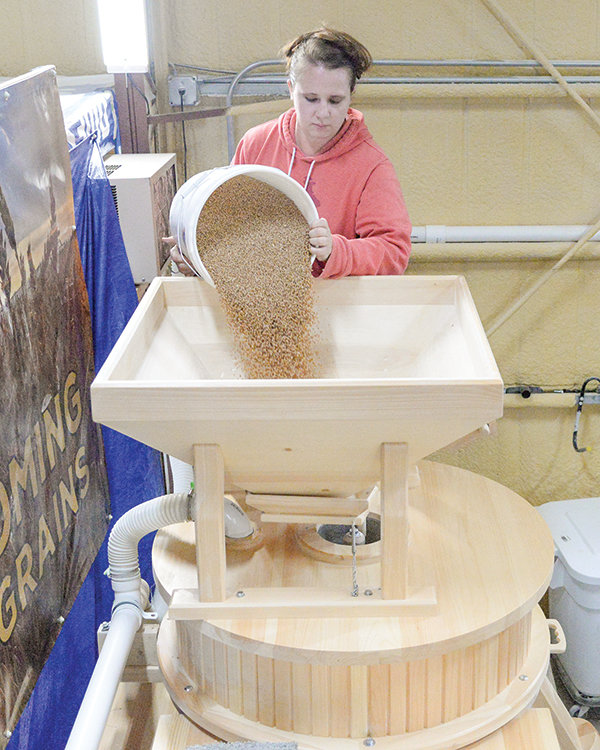 Wood pours grain into the hopper of her stone mill.
Tribune photo by Kevin Killough
Previous Next
Posted Thursday, September 30, 2021 8:15 am
By Kevin Killough

Sara Wood’s alfalfa field up on Heart Mountain is a noisy jungle, and she’s pretty happy about that. Wood didn’t apply any pesticides. For every harmful insect, she said, there are many more beneficial ones.

“I’ve never seen so many ladybugs in my life, and the bees have been so active,” Wood gushed as she stood in her hayfield with a swarm of buzzing and chirping insects around her.

Among the alfalfa is a tangle of brome and teff grasses.

“It’s symbiotic chaos. That’s what I call it,” Wood said.

In conventional farming, the farmer plants a primary crop and applies fertilizers, herbicides, and pesticides in a fight to keep all other plants and insects out of the field. Wood said there’s a better way that produces a more fecund soil. It’s called regenerative farming.

“If you go to the mountains and you see a meadow, do you see one kind of grass or one kind of flower? You see a very diverse mix. They feed each other; they take care of each other,” Wood explained. “Soil doesn’t like to be bare.”

With this regenerative approach, a farmer plants a primary crop, such as corn, which uses a lot of nitrogen. Along with the corn, she then plants clover and other nitrogen fixing plants, such as peas, which replace the nitrogen that the corn uses. This saves on fertilizer. Add to it no-till planting, and Wood says it results in healthier, more permeable soil that, since it retains moisture better, makes it more drought tolerant.

“You’re building this ecosystem,” Wood said. “Yeah, it doesn’t look clean. You don’t have these nice rows of crops, but you have your crop and these other things growing with it. And they’re feeding your crop and your crop is feeding them. Instead of fighting Mother Nature, you’re working with her.”

Wood is a fifth-generation descendent of original homesteaders to the area and describes herself as an agronomy nerd. Having farmed her whole life, she’s no stranger to conventional farming, and she has a sense of humor about how some might view the quirky approach she’s taking on agriculture.

“I’ve become the hippie on Heart Mountain,” she said.

Wood founded Wyoming Heritage Grains, which incorporates a holistic philosophy about regenerative farming, food awareness and locally sourced products. The company operates the only commercial mill in the state of Wyoming. Wood is selling flours, baked goods and mixes made from a variety of heritage and conventional grains, which she grows herself — over a dozen of these varieties.

Her interest in these niche foods began when she heard that people who have gluten sensitivities in the U.S. would have no trouble eating baked goods and pastas when they traveled to Europe.

In researching what the difference may be, she began to go down “rabbit holes,” as she calls them. Wood began to suspect it had something to do with the ancient grains, sometimes called heirloom grains, used in European bakeries.

Unlike our conventional wheat that is mass produced, ancient grains haven’t been so intensively crossbred. They’re more genetically similar to those grains people have been eating since the dawn of agriculture.

“A lot of people who are gluten sensitive, they can eat these flours without any problems,” Wood said.

There are a lot of different heirloom grains, but emmer, einkorn and spelt are the most common types of these uncommon grains. Einkorn, which is considered the first grain ever grown by humans, contains only 14 chromosomes. That’s compared to modern wheat’s 42.

As modern wheat was bred for yields, Wood said, it’s lost much of its nutritional value. She also believes the way that wheat is processed — in factory steel burr mills by the ton — is sucking nutrients out of the grain-based foods we eat.

“I think that’s what’s making a lot of people sick. You’re feeding your body with this byproduct junk. It’s not even food,” Wood said, adding that its lack of substantive nutrition contributes to overeating.

Wood said there is an overall lack of knowledge about our food. Produced in centralized factories, people’s food is processed far from where they live, and they know little about where their food comes from.

“We’ve been dumbed down in our food. We got away from what’s good for us,” she said.

This year, Wood purchased a handcrafted stone mill (which she affectionately calls Millie), built by a family-owned Austrian company. Unlike steel burr mills, stone mills operate at much cooler temperatures.

“The stone mill is slow and cool. It’s slowly crushing those grains, so you’re getting that natural oil,” Wood explained.

Millie can produce about 300 pounds per hour, which is considerably less than an industrial operation. She could run the mill faster, but she likes to keep the temperature around 100 degrees, which she checks regularly as it grinds. She said this maintains the nutritional integrity of the flour.

“I’m not trying to be General Mills and pump out a million pounds of grain a day,” Wood said, adding that her approach is “an art. It’s a very hands-on process.”

Trying to make a food factory successful in Wyoming comes with some strengths and challenges. Wood praises Wyoming’s freedom-focused regulatory environment, which makes it easy for cottage food industries to sell their products without having to go through a lot of red tape. It facilitates innovation. That helps make up for the state’s sparse population requiring deliveries over distances.

Originally, Wood was selling her flours at farmers’ markets, but the demand for baked goods was so high that she’s made a foray into baking.

Every week, Wood loads up her Suburban with all the products she makes from the dozens of grain varieties she grows herself. With her two kids in tow, she travels 600 to 800 miles per week all over the state to sell her products to grocery stores and restaurants in Casper, Jackson, Sheridan and Lander.

She specifically targets independent grocery stores and local restaurants, and she isn’t interested in getting on the shelves of big box stores like Walmart. In the same way she cultivates an ecosystem in her field, Wood is doing the same with her business relationships; she networks with other mutually-supporting small businesses.

“I really like being able to talk directly with my customers,” Wood said.

She said cottage food industries are vital to maintaining a sustainable food supply. The shortages stemming from the COVID-19 pandemic have shown how important it is to have food sold closer to where it’s produced.

“I’m trying to get people to connect with their food,” she said. “Why wouldn’t you want to basically have your own sustainable food community in your own state?”

Wood said she’s not alone in this goal, and with Wyoming’s laws friendly to the cottage food industry, more companies are springing up.

“Our local food market is starting to come together,” she said.

Walking along a dirt road next to her regenerative hayfield, Wood notices a furry caterpillar worming its way across the road.

“You are bad!” she snaps at it, pointing accusingly at the bug. She said it will grow into some kind of moth — she can’t remember what it’s called —  and it has a moss on its fur that is toxic. It’s not one of the beneficial bugs, she said, like bees and ladybugs. Nonetheless, she leaves it undisturbed.

“It’s nature,” she said and she walked away.

There’s a lot of challenges to building a successful niche food business, and Wood's regenerative farming techniques are in the earliest test seasons. The grains she produces are low yield, and so the flours are expensive. Nonetheless, Wood is optimistic about the future. She believes that as people become more interested in where their food comes from and what’s in it, cottage food industries like her own will grow in demand. And traditional farming practices are facing a number of pressures that will make experiments more appealing.

“It doesn’t pay hardly anything to farm the commodities around here,” Wood said.