Jay Carlisle, research director of the Intermountain Bird Observatory at Boise State University and associate research faculty member of the Biological Sciences Department at BSU, leads a team of 10 scientists studying the bird from its wintering … 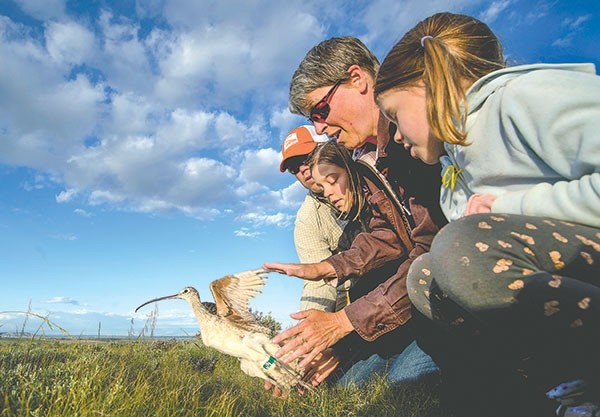 Katherine Thompson, her husband Tommy and their two daughters, Lucy, 10, and Sydney, 5, release a male long-billed curlew after it was captured, fitted with a solar-powered satellite transmitter and checked for health for a research project on the species by Jay Carlisle, research director of the Intermountain Bird Observatory at Boise State University. The long-billed curlew will be tracked by the research team at BSU, following it from its breeding grounds near Heart Mountain in Park County to its wintering grounds in central Mexico.
Tribune photos by Mark Davis 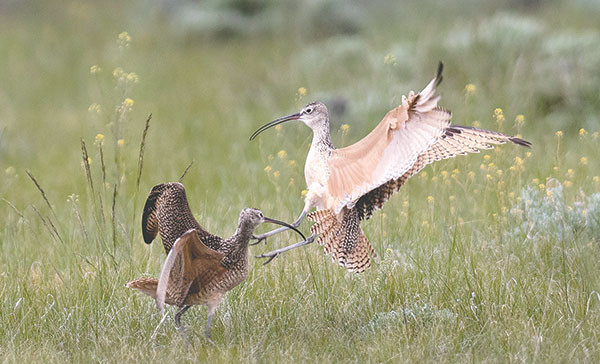 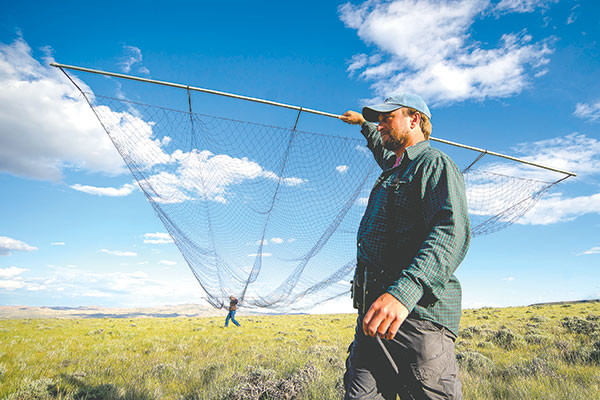 Jay Carlisle, research director of the Intermountain Bird Observatory at Boise State University, and Brian Peters, of The Nature Conservancy’s Heart Mountain Ranch Preserve, carry a 60-foot mist net used to capture long-billed curlews for a research study on the birds. Long-billed curlews have been in decline in some areas of Montana, Idaho and Wyoming, but the researchers say that there is a healthy population in northwest Wyoming. 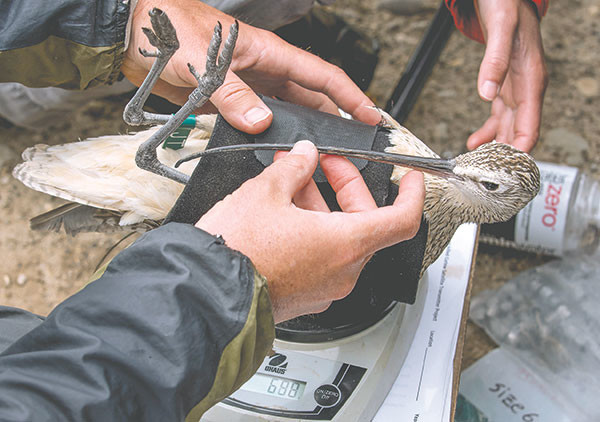 Carlisle and team leader Stephanie Coates run tests on a female curlew — including weight, size, blood tests and bill length — before fitting it with a satellite transmitter.
Previous Next
Posted Thursday, June 1, 2017 2:40 pm
By Mark Davis

Hidden in the hardscrabble margins near Heart Mountain and on Polecat Bench is a special bird: the long-billed curlew. And one man has dedicated his life to unlocking the secrets of this threatened species.

Jay Carlisle, research director of the Intermountain Bird Observatory at Boise State University and associate research faculty member of the Biological Sciences Department at BSU, leads a team of 10 scientists studying the bird from its wintering grounds in Mexico to its important breeding grounds in the grasslands of the midwest and western states in the U.S.

Carlisle has learned much about the intricacies of the curlews’ mannerisms. For nine years, he has followed the graceful, aggressively protective birds in the field. And now he stalks their every move with the help of satellite tracking technology.

But first he has to catch the birds.

When the trapping goes well, a curlew can be caught, tested, documented, fitted for a satellite transmitter and back on the nest in a little more than an hour. Of course, that’s after the bird is in the net. Just finding a pair of long-billed curlew with a full clutch yet to hatch takes hours — skill that took years of research by Carlisle to hone.

When it doesn’t go well, it’s painful and nerve-wracking.

Distances in the flats near Powell are hard to determine. And long-billed curlews are great at playing hide and seek.

Carlisle directs two crew members carrying a 60-foot long mist net through the cactus and sage brush, looking for a lost bird. The giant mist net used to capture the birds grabs everything it touches. Crew members are forced to hold the support poles for the net above their heads while looking for the exact spot the curlew hides.

“I thought the brown patch I was looking at was our bird,” Carlisle says.

The female watches the eggs by day — never leaving the nest. At sunset, there is a quick swap when the male arrives and the female leaves. Missing the swap from hundreds of yards away is easy. Losing the exact spot while waiting for the parent to settle in is easy — especially as heatwaves roil at ground level, and taking a second to wipe sweat out of your eyes is enough time to lose sight of the exact spot of the nest. Not to mention that the birds’ natural camouflage is good enough to evade the keen eyes of hawks, falcons and other predators, let alone the tired eyes of researchers.

After an hour, arms are weary and backs ache. Yet there is no giving up. There is such a short amount of time to catch a curlew before their eggs hatch that panic sets in. The crew is up and on the road every day before sunrise. By the time they finish their final hunt after sunset, grab a meager meal and find a place to rest, there is only time for a few short hours of sleep.

The crew had three satellite transmitters to attach to the leggy birds in Park County. It took three 14-hour days (not including travel time) in the field to locate, net, test and attach the transmitters.

This year Carlisle had 25 transmitters to deploy in Idaho, Montana and Wyoming. They cost about $3,000 per unit. Carlisle and crew leader Stephanie Coates, a graduate student at BSU working on her master’s in biological science, had been on the road for two exhausting weeks by the time all the transmitters were carefully attached to the backs of the feisty 1- to 2-pound birds.

As Carlisle and Coates, his only full-time research assistant, ran blood tests on the final Park County specimen, the exhaustion was apparent. Two nights sleeping on the floor of an office and two days without a shower gave both distressed finishes.

Neither complained. Their work is their life.

“I hope to go to the end of my career studying the relevance of the curlew to conservation,” Carlisle said.

The long-billed curlew is classified as a shorebird, according to the American Bird Conservancy. But the highly adaptable bird is most commonly found on grassland habitat — its breeding grounds — and grasslands are one of the most threatened habitats. Hundreds of millions of acres of grassland have been lost to agriculture and housing in the past decade — going at a faster rate than deforestation in the Amazon, according to the World Wildlife Fund. Fragmentation of habitat is just one reason for the decline in curlews.

“Some populations have declined, and since it’s a generalist species, it speaks to multiple factors. If we can understand what’s driving the decline, we can answer big-picture questions for grassland environments,” Carlisle said.

A decline in generalist species such as curlews or robins — species that can survive in a large variety of environments — is a warning sign for the entire environment, he said. His research on northwest Wyoming curlews shows a healthy population here in seemingly hostile conditions while they struggle elsewhere.

After fitting the final bird in Park County with its new solar-powered, highly engineered and lightweight transmitter, Katherine Thompson, her two daughters, Lucy, 10, and Sydney, 5, and husband Tommy, were tasked with releasing the only male long-billed curlew taken locally in the 2017 season.

“We were moved. It was a life-changing event for all of us,” said Thompson, the Northwest Wyoming program director for The Nature Conservancy.

Thompson has known Carlisle for more than 25 years.

“For Jay, this is deeply personal,” she said. “He is just as passionate about birds now as he was when he was 20.”