Bedford is painting the concave interior walls of a vintage 1948 Airstream trailer into a colorful canvas depicting scenes from national parks across the country. 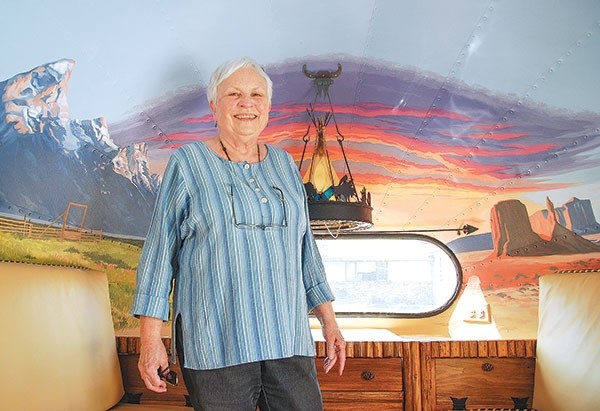 Powell artist Janet Bedford is turning a 1948 Airstream trailer into a work of art for former Grand Teton National Park Ranger Doug Leen as he prepares to tour the country giving presentations on the history of national parks and a series of vintage posters promoting the parks.
Tribune photos by Matt Naber 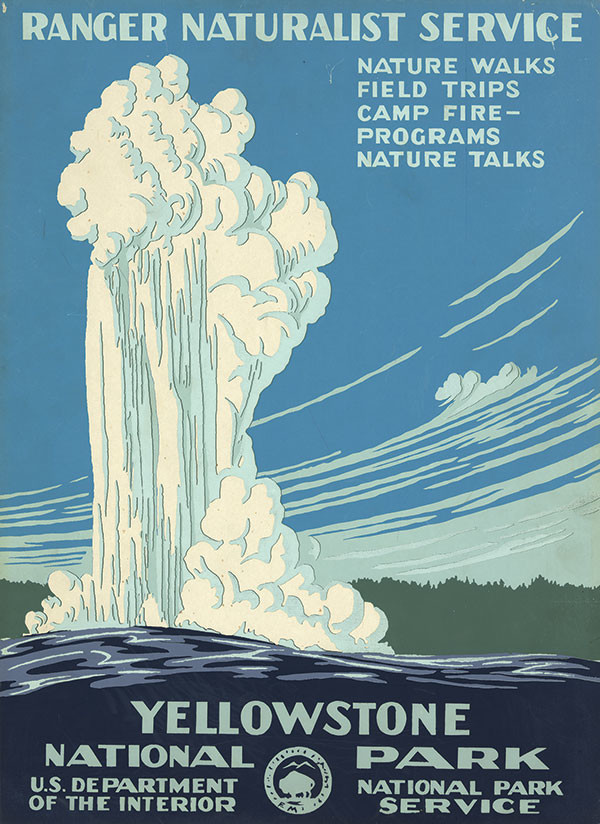 A series of posters from the early 20th century advertise national parks and are a major component of Doug Leen’s tour. Image courtesy Library of Congress 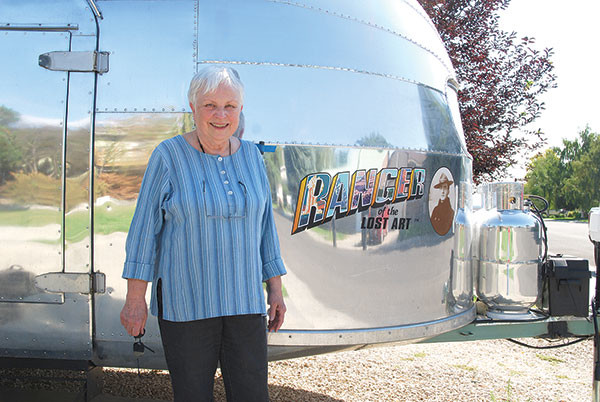 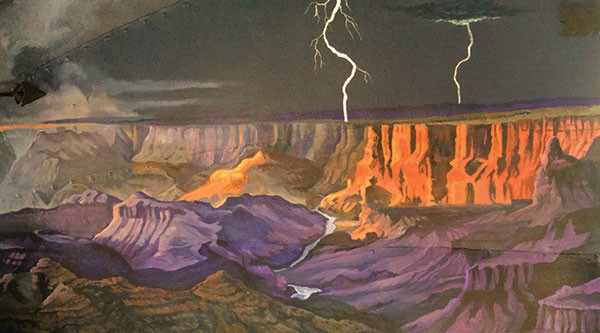 The bedroom walls have been painted into a night scene with stormy skies, cowboy campfires, the Grand Canyon and Old Faithful in the moonlight.
Previous Next
Posted Thursday, August 20, 2015 2:28 pm
By Matt Naber

Camping is an art, they say, and Powell artist Janet Bedford is transforming a camper trailer into a literal work of art.

Bedford is painting the concave interior walls of a vintage 1948 Airstream trailer into a colorful canvas depicting scenes from national parks across the country.

That is a fitting paint job for a trailer intended for a national tour by the camper’s owner, former Grand Teton National Park Ranger Doug Leen, that will promote national parks and their rich history.

At 19 feet long, it’s just big enough to accommodate a bed, kitchen, shower, toilet and table without having to step outside to reconfigure furniture.

“They are beautifully engineered, but on the inside they are plain and feebly built,” Leen said. “The frame was good, but the whole trailer is an axle-up restoration.”

The trailer originally didn’t have a bathroom or shower, but it does now — along with an air conditioner, flat-screen TV, stereo and new furniture.

The furniture was built by Lester Santos of Santos Furniture in Cody, an old friend of Leen’s. Santos recommended Bedford for the interior painting, Leen said.

Leen provided Santos with the specifics on how to use every square inch of the trailer’s interior so that it now has a shower and restroom and modern ammenities such as a stereo, anti-theft system and flat TV while maintaining the “old character of the Airstream,” Santos said. “We wanted to keep the look and feel of it.”

“I had to repaint the interior anyway, and thought I’d do a diorama and blend the furniture in with the art design,” Leen said. “And, really do it up right — I liken this to the chapel of Airstreams, and Janet is the Michelangelo of Airstreams.”

Comparing Bedford to Michelangelo seems appropriate, since her painting goes up and around the trailer’s ceiling.

“It has all been a challenge,” Bedford said. “The hardest part was painting an eagle in the sky; controlling my hand like that was really hard. I wanted it small, like it was way up in the sky — I kept at it, touched it up a bit.”

Leen’s trailer was brought to Bedford at the end of April, and she’s been working on it since then, she said.

The amount of time Bedford spends painting the trailer’s interior depends on weather, typically in stints of a few hours on up to six hours.

“When it is hot out, that thing is like an oven,” Bedford said. “I’ll go back out when it is past the hottest part of the day, but then the light gets to be tough.”

Bedford’s work was cut out for her, as the inside of the trailer wasn’t exactly a blank canvas; she is painting around the custom-made furniture.

“I’ve been working very carefully — things like the curtain rods are riveted, and they are sharp,” Bedford said. “Just being careful — lots of blue tape. Even working under the sink gives me a stiff neck.”

The trailer features a sunrise scene at the front end near the chandelier and a Native American design near the sink.

To the right of the door, there’s a scene of Monument Valley across from a view of Grand Teton — providing an impossible view of some of the country’s most picturesque locations all at once.

The bedroom in the back is a night scene of the Grand Canyon with a stormy sky and a cowboy campfire with the Airstream trailer nearby. But something was missing.

“I put in the Sleeping Giant Mountain that looks like a person snoring and I kept thinking, ‘It isn’t right to not have Yellowstone,’” Bedford said as she explained her collaboration with Leen. “I envisioned, since it was the bedroom, doing Old Faithful in the moonlight, and he came back with, ‘How about Old Faithful in the moonlight?’ We were definitely on the same page.”

Bedford’s been painting, sculpting and doing artwork of all varieties since childhood, but this is her first time painting a trailer. Her works can be found on display in the area, including the panther statue in Powell High School, so she’s no stranger to a challenge.

Painting on concave walls makes perspective tricky as well. When viewed straight ahead everything looks in line, but as the vantage point shifts to the side, the curved surface becomes more noticeable.

“You have to choose which spot is going to be the best, most frequented,” Bedford said. “Anything vertical is only vertical in one spot, but move to the side and it all goes askew.”

It is anticipated that the trailer will be at the Western Design Conference in Jackson Hole on Sept. 9-13 and then at “By Western Hands,” formerly known as Cody High Style, Sept. 23-27, Leen said.

RANGER OF THE LOST ART

Leen will use the trailer as he tours the country, discussing national parks’ history.

Leen, currently of Alaska, is returning to his campfire roots after 32 years as a dentist, inspired by an unexpected find that led to more national park discoveries.

Back when he was still a park ranger in the Grand Tetons, he found an old Jenny Lake poster from the 1930s that was in a burn pile.

That poster turned out to be one of only 14 designs the Work Projects Administration made following the Great Depression under The New Deal.

The poster series promoted everything from safety tips to encouraging visits to America’s national parks.

“They were just meant to educate and motivate people,” Leen said.

But World War II struck, and the national park poster series stopped before all the parks could get the same artistic treatment.

Over the years, posters were thrown away, repurposed and lost. Memory of them faded like the posters themselves.

The WPA hired artists and screened millions of posters for everything from reminding people to wear hard hats to brushing their teeth. The park poster series originally had 2 million copies, and only 2,000 are known to exist today, Leen said.

“So, 99.9 percent of the public poster art has been lost forever,” Leen said.

Decades after WWII, Leen found a set of black and white photos of the poster series in the archives at Harper’s Ferry National Park and restored the entire set. When he finished, the National Park Service asked him to make posters in the same style as the original 14, Leen said.

Now Leen is taking the posters on the road for the National Park Centennial with campfire and auditorium talks about the Work Projects Administration and its impact.

“I am going to be the Johnny Appleseed of the WPA,” Leen said.

Of course, he will be hitting the road in style, with his sleeping quarters being a literal work of art on wheels.

For more information and to check out the latest schedule of talks, go to rangerdoug.com or facebook.com/rangerdougsenterprises.

Powell artist Janet Bedford painted a sunrise scene surrounding the chandelier at the front end of Doug Leen’s vintage trailer, with a scene of Monument Valley across from a view of Grand Teton — providing an impossible view of some of the country’s most picturesque locations all at once.